Pro-Regime Friday Rallies Planned In Iranian Cities, Except In Tehran

Rouhani Under Attack For Not Being Informed About Crucial Developments
January 16, 2020

Rouhani Under Attack For Not Being Informed About Crucial Developments

US Envoy In Germany Warns Iran Over Call To ‘Chop British Ambassador Into Pieces’
January 16, 2020

Three Republican Senators Ask For Investigation Of Iranian Lobby Group In US
January 16, 2020

HRANA – The nationwide protests of November are one of the most significant events of 2019. Du…

15 years imprisonment for two of the arrestees of last November protests
January 16, 2020

HRANA – On January 13, 2020, Mobin Moradi was sentenced to a six-year prison term by Kermansha…

US sentences two Iranian agents to prison for spying
January 16, 2020

US sentences two Iranian agents to prison for spying

Iran Says Uranium Enrichment At Higher Level Than Before 2015 pact

Will the Latest Iran Protests Spark a Popular Uprising?
January 16, 2020

Will the Latest Iran Protests Spark a Popular Uprising?

US Ambassador states he is monitoring the treatment of Gonabadi Sufis after on the passing of Dr Noor Ali Tabandeh
January 15, 2020

Shabtannews -– Ambassador Sam Brownback , the US Ambassador at Large for International Religious Fre…

Mnuchin Says US Expects U.N. Sanctions On Iran To ‘Snap Back Into Place’
January 15, 2020

Will the Latest Iran Protests Spark a Popular Uprising?

VOA – Days of protests against Iranian leaders over the accidental downing of a Ukrainian airliner appear to indicate public anger has been redirected away from America’s targeted killing of a top Iranian general.  But foreign policy analysts say it is too early to tell if this is the beginning of a broader popular movement. “My expectation is that the …

CHRI – Protesters were physically attacked and arrested at universities in Tehran and other Iranian cities on January 14, 2019, the fourth consecutive day of protests that had erupted in the country after the Islamic Revolutionary Guard Corps (IRGC) admitted to accidentally downing a Ukrainian passenger plane. “The front entrance of the University of Tehran was full of security agents,” one eyewitness who requested anonymity … 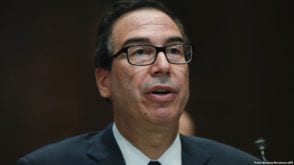 Radiofarda – Iran’s President Hassan Rouhani has once again sent mixed messages to the West, reiterating that the reductions in Tehran’s obligations under the 2015 nuclear deal are reversible but indirectly threatening Europe. Rouhani on January 15 called on Western forces to leave the Middle East and warned that “the Middle East could become unsafe for European soldiers in the …