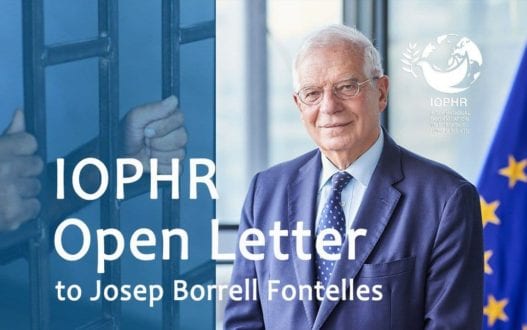 IOPHR’s open Letter to Mr. Josep Borrell Fontelles, regarding the responsibility of the Islamic Republic of Iran for providing security for prisoners of conscience

Shabtabnews – In a open letter to the High Representative of the EU for Foreign Affairs and Security Policy & Vice-President of the European Commission, Mr. Josep Borrell Fontelles, IOPHR highlighted “the astonishing inhumane actions of the Iranian regime against its own citizens, and asked for assistance in this matter. ” IOPHR in the letter pointed to the unfortunate unprecedented increase in the rate of human rights violations since the beginning of this year where more than forty-five people have been executed in Iran, which is the highest execution rate in the world to date.
The letter also drew light on the case of 33-year-old Mr Mahjoubi who was poisoned in the medical ward of Evin Prison, where access to medicine is not possible except through prison doctors, and the Iranian authorities refusal of the legal right of Mr Mahjoubi’s family for an autopsy. All of which was in violation of the request of his family, and against Iranian laws, all in order to hide the secrets of Mr Mahjoubi’s extrajudicial murder, inside Evin prison.

IOPHR also called for the issue of “human rights” to be given a central place in all future diplomatic negotiations with Iran, and to pay close attention to the issue of advancement of human rights standards in Iran. So that the Iranian regime will be compelled to comply with all international conventions in this regard, which will in turn, no doubt also be beneficial to the security issues around the world, especially within EU member states.