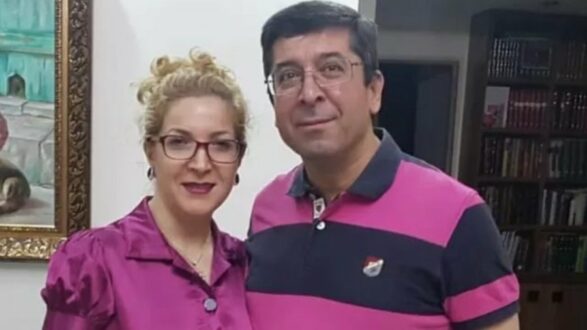 RFL/RE – The brother of Iranian doctor Hamid Qarahasanlou says interrogators severly torturedhis brother’s wife to extract a confession from her against her husband as security forces looked to pin the blame on protesters for the death of a member of the Basij paramilitary force during nationwide demonstrations.

Iran’s judiciary said on December 6 that it had sentenced 16 people to sentences ranging from long-term imprisonment to death for their alleged roles in the killing of Ruhollah Ajamian, who was part of the Basij, a volunteer militia under the Islamic Revolutionary Guards Corps (IRGC).

Hamid Qarahasanlou, who is in hospital recovering after reportedly being tortured as well, was one of five accused to be handed death sentences over the killing of Ajamian.

Qarahasanlu’s brother said in an interview with RFERL’s Radio Farda that, during the interrogations, Farzaneh, Hamid’s wife, was tortured to the point where to save herself, she lied and said that her husband may have kicked the victim.

“She resisted the first day. On the second day, they told her that we know your son is in the dormitory of Tabriz University, and if you don’t confess by tonight that Hamid hit the victim, we will arrest your son and he will suffer the same torture that you are suffering, and he may be killed,” Farzaneh Qarahasanlou’s brother in law told Radio Farda.

“This is the only evidence they have against Hamid, and Farzaneh later recanted the statement and told the court that her confession was obtained under torture and has no validity,” he added.

Hassan Qarahasanlou also told Radio Farda that the judicial authorities threatened their lawyers and finally, upon the withdrawal of the lawyers, they forced them to accept a public defender.

“The public defender spoke against my brother in court. He told Hamid that you are lying, and that you hit Ajamian and were not tortured.”

According to Qarahasanlou’s brother, the public defender personally went to the hospital where Hamid was admitted and without taking into account medical opinions, determined that Hamid Qarahasanlou was capable of appearing in court.

“The forensic doctor had said that Hamid could not be present in the court, that he could not even have a video call. That’s why he was absent from the first session of the trial, but still, they took him to the court for the second session,” Hassan Qarahasanlou said.

Prosecutors said Ajamian, 27, was stripped naked and killed by a group of mourners who had been paying tribute to a slain protester, Hadis Najafi, during ceremonies marking the 40th day since her death.

The four others sentenced to death were not named. Of the 11 people sentenced in the case, three were minors, judiciary spokesman Massud Setayeshi told a news conference, adding that the sentences can be appealed.

Hamid Qarahasanlou, who is a radiologist, was seriously injured during the arrest and interrogation.

According to his brother, one of Hamid’s ribs was broken during detention and five more during interrogation. Finally, these fractures resulted in internal bleeding and he was taken to hospital.

After Qarahasanlou regained consciousness following surgery, judicial authorities came to the hospital in the middle of the night to wake him and hand him the death sentence, Hassan Qarahasanlou said.

The cases were rushed through three hearings within six days before the sentences were handed down.

Human rights organizations have strongly objected to the death sentences being issued against protesters in Iran after “sham trials.”

The verdict comes after weeks of increased threats by authorities that they will react harshly to any unrest. Lawmakers have pushed the judiciary to render harsh penalties — including the death penalty — in trials for those arrested during protests over the death of 22-year-old Mahsa Amini.SEE ALSO:Iran Carries Out First Execution Of Amini Protester Despite Outcry From West, Rights Groups

The Mizan news agency, which is affiliated with the judiciary, reported on December 8 that 24-year-old Mohsen Shekhari had become the first protester to be executed after an appeal of his sentence was rejected by the Supreme Court.

Iran is currently in the throes of unrest as people take to the streets across the country to protest Amini’s death on September 16.

Police have met the unrest with deadly force.

The activist HRANA news agency said that, as of November 29, at least 459 protesters had been killed during the unrest, including 64 minors, as security forces try to stifle widespread dissent.

The Oslo-based Iran Human Rights Organization says the number of executions in Iran exceeds 500 this year.