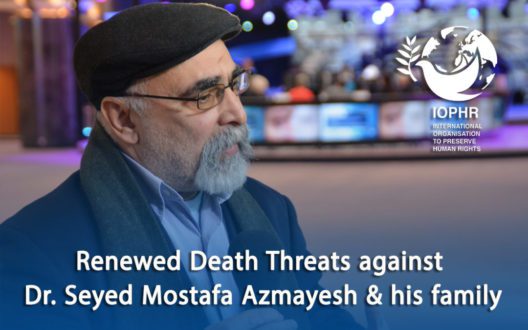 IOPHR’s statement regarding the renewed death threats of the Islamic Republic of Iran against the life of Dr. Seyed Mostafa Azmayesh and his family

Shabtabnews – In a statement IOPHR warned about renewed death threats by the security elements of the Islamic Republic of Iran against the life of Dr. Seyed Mostafa Azmayesh and his family.

The statement stated ” the instructive and anti-superstitious activities of Dr. Seyed Mostafa Azmayesh, who is a human rights activist, Islamologist, prominent jurist and an educator of Sufism and spirituality, has once again been subject of blatant threats against him and his family, by the security agents of the Iranian regime both within and outside of cyberspace.

“Since the death of Dr. Noor Ali Tabandeh, the Nematollahi Gonabadi Order, which is the largest and the oldest intellectual and spiritual organization outside the government, has been completely subjugated by the elements of the Iranian regime, who over the years have infiltrated the order, and thus now has become a tool in the service of the expansionist goals of the Iranian Supreme Leader.

“Among the cases which the security agents pressured Dr. Noor Ali Tabandeh to comply with their wishes, was the proposed dismissal of Dr. Seyed Mostafa Azmayesh, Dr Tabandeh’s authorized representative abroad, from his duties, which he was asked to perform via previous direct written authorities from Dr Tabandeh. However, Dr Tabandeh resisted such pressures as he had entrusted Dr. Azmayesh with the fight against ignorance and superstition in the culture of Iran, and knew the importance of Dr Azmayesh in this fight.

“The importance of this point becomes clear, when we pay attention to the system of Velayat-e-Faqih, which controls Iran, and its announcement of the beginning of the “second phase of the revolution”, which is the globalization of the “ideology of Velayat-e-Faqih”, at the same time as widespread repression and its attempts to subjugate the Nematollahi Gonabadi order. All this points to the use of the capacity of Iranian Sufism, as a means to expand the influence and power of the Supreme Leader around the world. It is for this purpose that for many years the Mustafa International Society, which is the main institution responsible for expanding the influence of the Iranian Supreme Leader in the world, has started to work closely with the security intelligence service infiltrators within the Nematollahi Gonabadi order.

“Thus, it is clear that the letter dated 24th October, 2018 from Dr. Tabandeh to Dr. Azmayesh was in fact aimed at disrupting the Iranian government’s plan to use the influence of Iranian spirituality and Sufism in order to expand its influence. That is why the security agents who failed to pressure Dr   Tabandeh to dismiss Dr. Azmayesh, decided to speed up their plan to remove Dr. Noor Ali Tabandeh. All of which occurred a year later, after a long period of persecution and slow poisoning that lead to Dr Tabandeh’s death during an unnecessary surgery, which was used to cover up his murder.

“Since then, the pressure and threats of security officials on Dr. Azmayesh and his family, who represent the only remaining stronghold of free thought in Sufism and spirituality in Iran, have increased sharply.  Private messages and the recent public release of threatening posts in cyberspace social media have been used to threaten his life.”

The statement ended by stating: “Such threats must be taken seriously, because the intimidators are trying to turn the Nematollahi Gonabadi order, which until the time of Dr. Noor Ali Tabandeh was the greatest herald of altruism and peace in Iran, into a mafia and murdering ring. A quick look at the recent killings of the Gonabadi Sufis who were followers of Dr Tabandeh, will no doubt show the seriousness of the situation. For example, the assassination of Behnam Mahjoubi and the recent murder of Mohammad Pour-Yousofi, all show the power of the Iranian Security agents within the Gonabadi Sufis, who are transforming the Sufi order into a mafia and a murderer ring.

“Accordingly, the IOPHR would like to warn the world in regards to the ominous signs of the threats of assassinations, bloodshed and murder that have been rising from within the newly formed Gonabadi sect, which has access to a vast network of the Iranian government, connected to Sufis abroad, all of which has the potential to make this group an international assassination machine.

“In this regard, IOPHR also once again draws the attention of EU officials to the recent threats of security agents against the life of Dr. Seyed Mostafa Azmayesh – especially given the history of assassination and murderous activities of the Tehran government based in Europe. Which at any moment could lead to the death and victimization of more European citizens!”