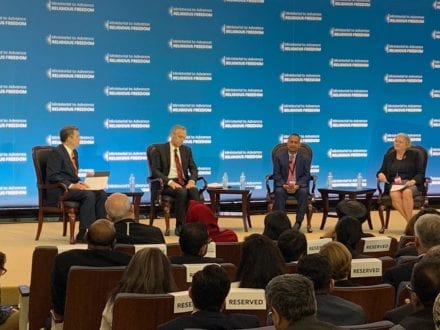 The room was filled with people representing nations and religions worldwide.

The conference began with a speech from Sam Brownback, US Ambassador-at-Large for International Religious Freedom who stated:

“We’ve hit a nerve here, “People want religious freedom and they want it now. And we see it as a global crisis around the world that has received far too little attention, a global crisis that we are determined to reverse.”

Present in this conference was also Dr Hamid Gharagozloo is a representative of the International Organisation to Preserve Human Rights (IOPHR). Who urged EU to stop its support for the Iranian regime and bring its policy on Iran in line with US, as the Iranian regime is fundamentally a regime based on oppression of all minorities particularly those who do not follow the regime’s intolerant ideology.

The keynote speech at the conference was given by the US
Secretary of State Mike Pompeo who stated: “All people from every place on the globe must be permitted to practice their faith openly.  In their homes in their places of worship in the public square and believe what they want to believe.”

Secretary of State Mike Pompeo also said his own Christian beliefs compel him to fight for the freedom of others not just in the United States, but around the world.

Organisers say 80 percent of people worldwide live in a religiously restricted environment.  They’re hoping the conference, now in its second year, will mark the beginning of a global human rights movement centred on religious freedom.

Speeches by different religious groups as reported on CBN.com from the conference.