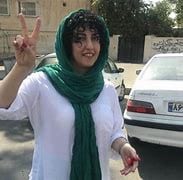 RFL/RE – A prominent Iranian human rights advocate incarcerated in the notorious Evin prison has published a letter saying that Iran’s authoritarian theocracy has prevented people from achieving their rights, including democracy and freedom, and a normal relationship with the world.

Narges Mohammadi sent the letter on November 23 to the UN Human Rights Council (UNHRC), whose mission is to promote and protect human rights around the world. Mohammadi’s letter was published a day before a special meeting of the council on Iran.

Mohammadi asks the council to “document the repression and killing of the Islamic republic” and requests “permanent supervision of the UNHRC on the government’s behavior” to include respect for human rights in relations of the government.

Mohammadi’s letter also notes the high number of prisoners and says that brave and innocent young people are killed every day in the streets.

“They have gone from killing women to killing children, but people’s resistance continues,” she says in the letter.SEE ALSO:Iranian Rights Defender, Journalist Sent Back To Prison

Anger over the death of 22-year-old Mahsa Amini while in police custody in September has prompted thousands of Iranians to take to the streets to demand more freedoms and women’s rights. The widespread demonstrations represent the biggest threat to the Islamic government since the 1979 revolution.

Germany initiated the special session of the UNHRC, which has 47 members, in order to discuss the human rights violations that have taken place during the nationwide protests in Iran.

A resolution is set to be introduced at the November 24 session that will call on Iran to end the repression and violence against its own people. The resolution also provides for an independent investigative mission to document human rights violations in Iran in the context of the protests.

At least 416 people, including 51 children, have been killed by security forces across the country, according to the Oslo-based Iran Human Rights group.