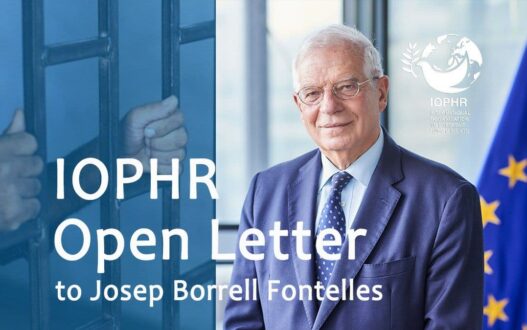 Shabtabnews – IOPHR in a open letter, to the Deputy Commissioner of the European Commission and High Representative of the European Union in Foreign Policy and Security Affairs, requested that any agreement with the ruling regime of Iran be firmly conditional on the regime’s strict compliance with international human rights standards.

The letter stated that such conditionality is a necessity because ” the regime ruling Iran is currently claiming to protect human values, ​​and dignity of its citizens during its dialogue with the Western governments, while lacking lawful and legal legitimacy, as shown by continuous protests of its citizens – all of which have been ruthlessly and murderously putdown. Consequently, any foreign support for any agreement with the current Iranian regime, is not only illegal, but it will lack the necessary legal foundation. “

Moreover IOPHR in the letter pointed out that :”one look at the history of negotiations between the Western parties and the ruling regime of Iran, will clearly show that the increase or decrease in the number of human rights violations in Iran, is directly related to the ups and downs of these negotiations. It is also noteworthy that western governments all of which claim democratic values ​​are trying to reach an agreement with a system that has the highest per capita execution rate in the world.  Especially, as the Iranian regime has set a new annual record for the number of executions per capita, in Iran and the world, with the figure of 333 executions last year. Sadly, no doubt if international pressure is not placed on the Iranian system, a new record will be achieved by the end of this year.”

The letter also stated : “its time for Western governments to show the people of Iran they are not like China and Russia, which aim to loot Iran’s resources, but instead they are loyal to democratic values and will not enter into a hypocritical transaction with the illegal and puppet ruling system of Iran that has made Iran a breeding ground for Russian aggressors and Chinese looters, for the sake of fleeting Iran’s material benefits. Finally, the IOPHR once again notes that the only way to create a sustainable security for European citizens is to avoid any type of agreement with the Iranian regime, that does not guarantee the strict observance of international human rights standards by the Iranian regime, and thus supports the Iranian people in their struggle to achieve the same rights and values ​​that the Western governments were founded on.”