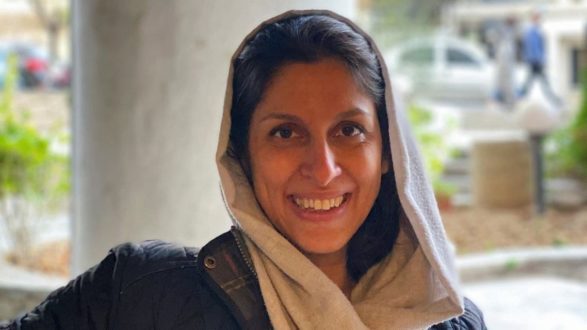 Iranwire – A new article published in Ferdowsi University’s Quarterly Journal of Public Law Studies has appealed to Iranian law to pour cold water on the UK’s demands that Tehran free British-Iranian charity worker and hostage Nazanin Zaghari-Ratcliffe. The study, entitled Legal Dimensions of British Diplomatic Support for Nazanin Zaghari, neglected to use the prisoner’s British second surname as it strived to show her “dominant” citizenship was Iranian.

Britain’s involvement in Nazanin Zaghari-Ratcliffe’s case, the report said, exceeded the scope of consular assistance and had entered the diplomatic arena, which was not unacceptable to the Islamic Republic. British officials had intervened, the author claimed, on the basis that Nazanin’s dominant nationality was British.

The report claimed three conditions had to be met in order for Nazanin to receive diplomatic assistance. The first was a violation of international law having occurred, which the author did not deny. The second was that the issue could not be resolved inside Iran, and the third, that Nazanin’s dominant, British nationality could be proved.

The article further accused Nazanin of “abus[ing] the capacity of Iranian law to retain her Iranian citizenship and has used both her nationalities depending on the circumstances.” It went on: “The British argument that because Iranian law does not recognize dual citizenship, Ms. Zaghari had to travel to Iran with her Iranian passport is also unacceptable.”

Instead, the author suggested, the UK’s support for a jailed British citizen was “politically motivated”. As such, “by denying Ms. Zaghari’s dominant citizenship under Iranian domestic law, the Iranian government could prevent Britain from having the authority to exercise diplomatic protection and bring an action before the International Court of Justice.”

The output of academic journals in Iran is strictly controlled and often reflects the views – or propaganda narratives – of the ruling clergy. With some irony the report’s author also accused Nazanin and the British government of “abusing international and human rights law”.

Nazanin Zaghari-Ratcliffe was arrested at Imam Khomeini Airport in April 2015 together with her young daughter. She was accused of espionage, which she denied, and jailed for five years, after which she was tried on a fresh “propaganda against the regime” charge and sentenced to another year in prison.

She is understood to be being held as leverage over a historic £400m debt owed by the UK to Iran for Chieftain tanks paid for during the Shah’s time, but not delivered after the Islamic Revolution. The Islamic Republic’s ambassador in London, Mohsen Baharvand, said a British delegation had traveled to Tehran last week to discuss mechanisms for repaying the debt. Iranian officials have long denied any connection between the two issues but have engaged with a Western third country on Nazanin’s case, indicating they recognize her real citizenship.