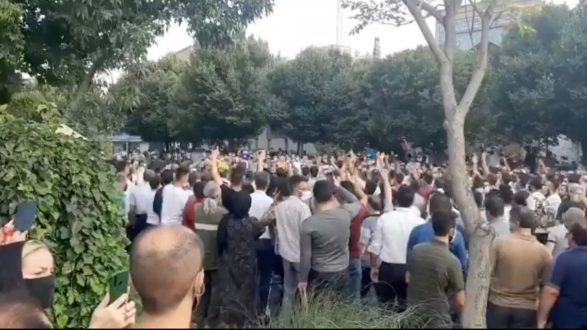 RFL/RE – Human Rights Watch (HRW) has called on Iranian authorities to “immediately and unconditionally” release those detained during protests against water shortages and economic hardships in Khuzestan and other provinces and to investigate the abusive use of lethal force.

Demonstrations than began on July 15 in dozens of towns and cities in Khuzestan, a province with a large ethnic Arab population, later expanded to other regions of Iran, including parts of Tehran, amid the worst drought in Iran in at least 50 years that has triggered weeks of power blackouts.

At least nine protesters were reported killed and many others were detained during the protests.

“The rising death toll and mass arrests raise grave concerns about the Iranian authorities’ response to recent protests in Khuzestan and other provinces,” HRW said in a statement published on July 30.

In addition to the drought, Iran’s economy has been hit hard by U.S. sanctions and by the COVID-19 pandemic. Inflation is over 50 percent annually, and unemployment is on the rise. Pensioners have been protesting, and there have been reports of wage arrears.

From Khuzestan, protests expanded in several other provinces, including Isfahan, Lorestan, Eastern Azerbaijan, Tehran, and Karaj.

HRW said that rights groups have verified the identities of at least nine people who were shot dead or died of injuries during the protests, including a 17-year-old boy, in Khuzestan and Lorestan.

At least 171 people were arrested, HRW, said, adding that the actual number of deaths and arrests may be higher.

The New York-based group called again on the member countries of the United Nations Human Rights Council to establish a UN-led inquiry into alleged serious rights violations during and in the aftermath of the widespread protests.

“Only a transparent investigation into the deaths of protesters, holding security forces accountable for wrongdoing, and a commitment to address long-term grievances can begin to address the local population’s loss of trust in the authorities,” HRW said.