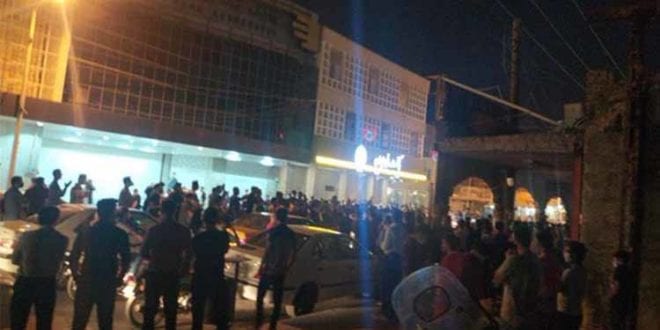 VOA- Iranians angered by their government’s handling of a faltering economy staged a rare protest in a southwestern city on Thursday, in defiance of security forces which dispersed attempted demonstrations in other parts of Iran.

A review of images sent to VOA Persian appears to show Iranians chanting anti-government slogans in the streets of Behbahan in Iran’s Khuzestan province after nightfall Thursday. The images also suggested that Iranian security forces in the south-central city of Shiraz and northwestern city of Rasht took actions to prevent protesters from rallying.

VOA could not independently verify the authenticity of the photos and video clips. But they reflected the challenges facing Iranians in trying to revive nationwide protests that Iran’s Islamist rulers suppressed last November, killing hundreds of people. Those protests were triggered by the government’s raising of subsidized gasoline prices by 50 percent in a recession-hit economy faltering under official mismanagement and U.S. sanctions.

Authorities restricted internet connectivity in Khuzestan late Thursday as Iranians tried to share images of the Behbahan protesters with one another and the outside world. Iran’s government did the same thing in November, but on a national scale and for almost a week.

In one video from Behbahan, a group of protesters is seen gathering near the city center and chanting: “No Gaza, no Lebanon, I sacrifice my life for Iran.” It has been a common chant of Iranians who have joined other peaceful protests in Iran in recent years, highlighting what they see as their Islamist rulers’ squandering of the nation’s resources to arm proxy militias in other parts of the region.Download File  Embed Download AudioIranian security forces attempt to disperse demonstrators in Behbahan, Iran, on July 16, 2020.

In a second video, a smaller group of protesters hide in a walkway of Behbahan’s bazaar, as security forces in the distance appear to fire tear gas. Some protesters can be heard saying “Death to Khamenei,” referring to Iran’s supreme leader, and criticizing the security forces as “shameless.”

In comments published by Iranian state media, Behbahan’s police chief Mohammad Azizi acknowledged that the protesters in his city were angry about Iran’s economic situation. He said security forces broke up the demonstration without casualties.Download File  Embed Download AudioTires set on fire, apparently by protesters, in Shiraz, Iran, on July 16, 2020, as security forces on motorcycles patrol the streets.

Elsewhere, a video from Shiraz appears to show tires burning on a pedestrian boulevard in the city’s 7th District, possibly having been set alight by protesters during the day Thursday. A narrator can be heard saying that the boulevard has been blocked by the fire. Photos also appearing to be from Shiraz show security forces on motorcycles in a display of force aimed at preventing other disturbances.Download File  Embed Download AudioIranian security forces disperse people apparently trying to stage street protest in Rasht, Iran, on July 16, 2020.

In a fourth video clip received by VOA Persian, a citizen journalist films what appears to be Rasht’s Shahrdari Square on Thursday night, showing security forces on motorcycles trying to stop would-be protesters from gathering in the street.

VOA’s sister network Radio Farda said reports from Iran indicated that authorities tightened security in the capital Tehran, Isfahan, Mashhad and Shiraz from midday Thursday. It said the tightening was in anticipation of protests also linked to a massive social media campaign against the Iranian government’s policy of executing its opponents and dissenters.

So far this month, Iran has executed several people for drinking alcohol, allegedly spying for the United States and being members of a banned Kurdish political party. Those executions, and Iran’s July 10 upholding of death sentences of three men for participating in November 2019’s mostly peaceful anti-government protests, have prompted Iranians worldwide to flood Twitter this week with millions of messages containing the Persian hashtag #Don’tExecute.