VOA – Iran’s Intelligence Ministry said Thursday that five of the men involved in attacks on the country’s parliament and the tomb of former leader Ayatollah Ruhollah Khomeini were Iranians who had joined the Islamic State group.

The ministry said the men had fought for Islamic State in Mosul, Iraq, and in Raqqa, Syria, before returning to Iran in August of last year.

The near simultaneous attacks by machine-gun wielding assailants and two suicide bombers were claimed almost immediately by Islamic State, and could set off a new round of hostilities in an already tense Middle East.

In a new twist, the terror group’s Amaq news agency also quickly distributed a 24-second video of the attack showing a bloody, lifeless body inside the parliament complex, and threatened it would strike again.

Iranian security officials late Wednesday confirmed IS involvement, saying the attackers, many disguised as women, were Iranians who had joined the terror group. 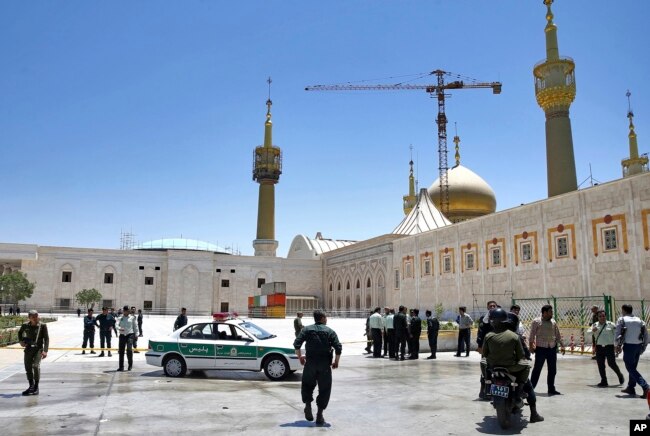 Police officers patrol the scene, around the shrine of late Iranian revolutionary founder Ayatollah Khomeini, after an attack by several perpetrators in Tehran, Iran, June 7, 2017.

The officials said Iranian forces killed six of the attackers. Another five suspects were arrested, and two suicide bombers blew themselves up. Officials suggested a third attack had been foiled.

“These fireworks have no effect on Iran,” Supreme Leader Ayatollah Ali Khamenei told state-run television, vowing the terrorists “will soon be eliminated.”

Islamic State and Iran have long been at odds, with IS fighters facing off against Iranian proxies and Iranian-led forces in Syria and Iraq. But Wednesday’s attacks marked the first by the Sunni terror group in the majority Shi’ite country.

U.S. intelligence called the incident the worst domestic terror attack in Tehran since the 1980s, but an official said there have been signs IS was, at least, hoping to strike.

“ISIS has expressed a growing interest in conducting attacks on the Iranian homeland,” the official said, using an acronym for the militant group.

And pointing to increasingly virulent propaganda over the past six months, the official added it had become clear “Iran has been at the top of ISIS’ enemy list.”

“This terrorist attack happened only a week after the meeting between the U.S. president and the [Saudi] backward leaders who support terrorists,” according to statement by Iran’s Revolutionary Guard Corps. “The fact that Islamic State has claimed responsibility proves that they were involved in the brutal attack.”