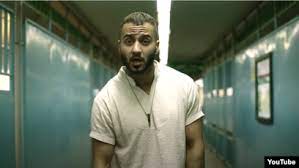 Salehi, who has criticized the Islamic Republic through his lyrics, was arrested nearly a month ago amid a wave of nationwide protests against the clerical regime.

Salehi was informed of the charges against him during a court hearing held behind close door in the central city of Isfahan on November 26, according to Salehi’s Twitter account, which has been run by one of his relatives since his arrest.

It said the rapper was denied a lawyer of his choice.

Salehi, who has long made music with political themes, was arrested on October 30. He is said to have been subjected to “severe torture” at the hands of the clerical regime while in solitary confinement.

The artist had released songs in support of the demonstrations demanding more freedoms and women’s rights, and posted pictures and videos of himself during demonstrations.

Official media have claimed that Salehi was arrested while trying to flee the country, which people close to the rapper deny.

In his only phone call to his family after his arrest, Salehi said he had one of his ankles broken in custody while being beaten by intelligence forces.