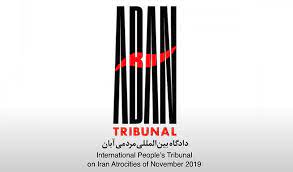 Iran Human Rights (IHRNGO); September 30, 2022: The Aban Tribunal panel has found the leaders of the Islamic Republic guilty of crimes against humanity. Welcoming the decision, Iran Human Rights calls on the international community to establish mechanisms to hold the perpetrators accountable.

Iran Human Rights Director, Mahmood Amiry-Moghaddam said: “Recognising the crimes committed against protesters in the November 2019 protests as crimes against humanity is an important step on the path to justice. The perpetrators can be held accountable anywhere in the world for the rest of their lives. The message this ruling sends to the repressive forces, especially those currently on the streets, is clear: following orders does not absolve you of criminal responsibility. Don’t be complicit in their crimes!”

The International People’s Tribunal on Iran’s atrocities delivered a summary of their findings on September 30, 2022. It found that the Islamic Republic government and its security forces (including Ministry of Interior, the Supreme Council of National Security, Provincial Security Councils, police forces (NAJA), the IRGC, the paramilitary Basij, Ministry of Intelligence, other plainclothes and the Ministry of Justice) designed and implemented a plan to commit crimes against humanity of murder, imprisonment, enforced disappearances, torture and sexual violence in order to quell the protests and conceal the crimes committed.

The Panel found 13 individuals planned and implemented the criminal plan to commit crimes against humanity, that their contribution was significant and/or essential and they shared a criminal intent to commit the crimes against humanity of murder, imprisonment, enforced disappearances, torture, sexual violence and, with one panel member dissenting, persecution in order to quell the protests and conceal the crimes committed:

On 15 November 2019, following a massive, sudden spike in fuel prices, nationwide protests broke out across Iran. Protests were largely peaceful, but in certain cities, public and private property incurred damage. At its peak, from 16 November, the government imposed a near-total shutdown of the internet and conducted a brutal crackdown on protestors. Police, security and military forces shot and arrested protestors, while the authorities restricted access to information.

Reports of killings of protestors emerged from the early hours of the protests. Although the government has admitted responsibility for 225 deaths, media and human rights organisations have reported a death toll of between 304 and 1,500. Human rights organisation, Justice for Iran, has documented incidents of use of unlawful lethal force in 39 cities across 15 provinces, over the course of less than five days, caused hundreds of deaths and thousands of injuries.