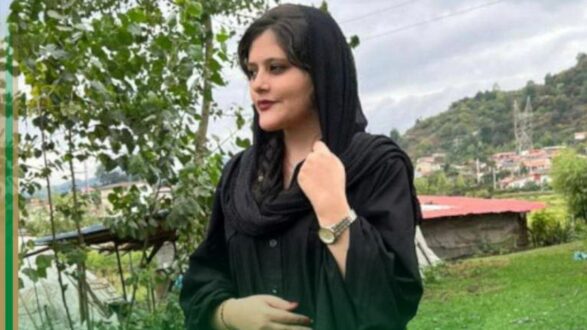 Mahsa Amini: An Iranian journalist broke the news of the death. Now she’s in jail

middleeasteye.net – Niloofar Hamedi had long been interested and concerned over the influence of the “morality police” in Iranian society and the role they played in enforcing mandatory headscarf laws in the country.

On 16 September, the reporter, who works for the reformist daily newspaper Shargh, managed to gain access to Kasra hospital in Tehran where a 22-year-old Mahsi Amini was being treated following her detention by the morality police for allegedly wearing her hijab inappropriately

The young Kurdish woman had, according to police, suffered a sudden heart problem, but her parents disputed this. She would die later that day.

That same Friday Hamedi tweeted a photo of Amini’s parents crying in the hospital:

The picture quickly spread along with Hamedi’s reporting on Amini’s death, eventually spiralling into nationwide protests that have so far seen at least 76 people killed, according to rights groups, and renewed calls for the end of the mandatory headscarf and the so-called “morality police” who brutally enforce it.

According to one of her colleagues at Shargh, speaking to Middle East Eye on condition of anonymity, the impact of her reporting was “massive”.

“She has always been a brave journalist, and her bold reports have made society aware,” said Sima*.

Another colleague at the newspaper, Ashraf*, said: “If it weren’t for her courage, the tragic incident that happened to Mahsa Amini would not have been reported to the media so quickly.”

‘As I am talking to you right now, I am worried that these conversations will be overheard’

On 22 September, Hamedi was arrested.

“This morning, security agents raided the house of my client Niloofar Hamedi, journalist of Shargh newspaper, arrested her, searched her house and confiscated her belongings,” wrote her lawyer Mohammad Ali Kamfirouzi on Twitter.

At the same time, her Twitter account, where she had originally posted the influential photo of Amini’s parents, was suspended without explanation.

According to Kamfirouzi, Hamedi is being held in solitary confinement in Tehran’s Evin prison, where she has been interrogated. She has not been told of any other charges against her.

The Committee to Protect Journalists (CPJ) says that at least 19 other journalists have also been arrested as of Monday.

For Hamedi’s colleagues, working at a reformist newspaper which has been a thorn in the side of the conservatives who are currently in power in Iran, life as a journalist has become a daily worry.

“Journalism in Iran is not a job. It is a potential crime from the point of view of security institutions,” said Sima.

“As a result, as I am talking to you right now, I am worried that these conversations will be overheard.”

Ashraf concurred. “When you see every day that one of your colleagues has been arrested, is it natural to worry and think that I might be next?” he said.

Iran has never been a haven for freedom of the press. Under the rule of the Shah, the media was heavily restricted along with other civil liberties, and while the 1979 revolution saw an initial flourishing of expression, this was soon repressed as the Islamic Republic went to war with neighbouring Iraq.

Compared to some of its neighbours in the Middle East and Central Asia, Iran does however have a diverse range of media perspectives.

Newspapers aligned with the country’s reformist camp like Shargh, Etemaad and Aftab Yazd have regularly reported on corruption scandals, criticised political figures, and occasionally brought stories of injustice to the fore. Conservative rivals like Kayhan have also been willing to voice critiques of officials.

Nevertheless, according to CPJ senior researcher Yeganeh Rezaian, there is little approaching a free press in Iran.

Rezaian was herself jailed with her husband, Washington Post reporter Jason Rezaian, in Iran in 2014. Although she was released after 72 days, Jason would remain in prison until January 2016.

She told MEE that critical journalists regularly face arrest, and Iran is one of the most heavily censored countries in the world.

“Even reformist newspapers are still state-run media. Therefore, they cannot freely cover all political or human rights news,” she said.

“Even if they are able to sometimes briefly cover a story, the paper’s editor and the reporter pay a heavy price for their coverage of the story – like Niloofar Hamedi.”

Hamedi was no stranger to controversy and, like many journalists in the country, she pushed against a set of red lines that attempted to put limits on her reporting.

In June, a report she wrote on the shooting of a former member of Iran’s national boxing team by the “morality police” sparked an earlier outcry over the organisation’s use of violence to enforce the headscarf.

Reza Moradkhani and his wife were walking through Tehran’s Pardisan Park when they were approached by the police over his wife’s supposedly inappropriate hijab. An argument ensued which eventually saw the couple pepper sprayed and Moradkhani shot in the leg.

“For people who can’t afford to go to the gym and have private trainers because of time or financially, such big parks are considered the best place to exercise. In recent years, Pardisan has become the main hangout for athletes, especially in the mornings and evenings,” wrote Hamedi.

“Now, with the occurrence of such events, it is not clear what the approach of the police force will be in future encounters.”

Despite the hurdles that face Iran’s journalists, particularly women, Hamedi had always had “a hopeful spirit and advised her friends to stay hopeful and do not be disappointed” when dealing with the daily stress of Iranian journalism.

“Niloofar was a yoga enthusiast and always advised her friends to go to yoga.  She always said that yoga relaxes her,” said one colleague.

The death of Amini has prompted a number of reformist papers to broach one of Iran’s taboo subjects and call for the abolition of the “morality police” who enforce the wearing of the headscarf and who have been blamed for Amini’s death.

With the anger continuing to spread around the country, however, the government has moved to limit media and its impact.

Apart from the arrests, numerous social media and messaging apps have been blocked, along with major restrictions on internet access.

“Before this happened, it was not easy, and we had to keep silent about many issues. But now, especially in the current security environment, it has become much, much harder,” explained Sima.

“Security organisations have even ordered us not to cover street protests, and this is really disappointing.”

Communications and media have been integral to the spread of the protests in Iran. It is no surprise, therefore, that authorities have moved to limit them.

“The regime cutting people from the outside world itself sends a very clear message that they don’t want anyone to know what is going on inside the country. They don’t want the international community to know that they are brutally hitting and killing young protesters,” Rezaian said.

Videos from inside the country have shown women burning their headscarves, fighting with police, chanting “death to the dictator” and destroying images belongingto Supreme Leader Ali Khamenei and late military commander Qassem Soleimani.

Outside Iran, the protesters have gained widespread support. Yet many Iranians have complained that activists, politicians and commentators outside Iran, rather than those leading and documenting events on the ground, have ended up dominating the narrative on the demonstrations.

But in prison, the journalist whose reporting sparked one of the most dramatic periods of Iran’s modern history remains largely unheard.

Hamedi’s lawyer tweeted on Monday that she had contacted him and her mother from prison. Although she still knows little about her case, she said she was “fine” and coping with solitary confinement by continuing to practise yoga every day.

If there’s one thing you learn as a journalist in Iran, according to Sima, it’s resilience.

“Niloofar always had a strong spirit – I think she can overcome this difficult situation again,” she said.

*Names have been changed for security reasons