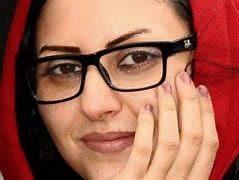 Shabtabnews – The United States Commission on International Religious Freedom (USCIRF) today expressed relief that religious prisoner of conscience Golrokh Iraee has been released from prison in Iran. Iraee’s release is accompanied by a two-year restriction on travel and joining political groups.

“We are relieved Golrokh Iraee’s detention has ended, yet she and so many other Iranian women continue to endure blatant religious freedom violations for peacefully expressing their beliefs,” said USCIRF Commissioner Anurima Bhargava, who advocates for Iraee as part of USCIRF’s Religious Prisoners of Conscience project. “We call on Iranian authorities to remove Ms. Iraee’s two-year ban on travel and participation in political groups and cease the persecution of Ms. Iraee and other women on supposed religious grounds.”

In 2015, a Tehran court sentenced Iraee for “insulting Islamic sanctities” over a short story she wrote criticizing the religiously grounded practice of stoning adulterous women to death. She was sentenced in absentia to an additional year in prison last April for “spreading propaganda against the state.” Iraee was held in inhumane conditions throughout her imprisonment. Prison guards assaulted her on several occasions, and she was often transferred to wards with those convicted of violent crimes. In April 2018, Iraee’s health deteriorated greatly after she went on hunger strike to protest prison conditions.

“Golrokh Iraee’s long-overdue release follows years of prison mistreatment, denial of due process, and being prevented from seeing her husband Arash Sadeghi, who is ill with cancer,” added Commissioner Bhargava. “The U.S. government should sanction and hold accountable the high-level Iranian officials responsible for Ms. Iraee’s mistreatment.”

In its 2022 Annual Report, USCIRF recommended that the U.S State Department designate Iran as a Country of Particular Concern (CPC) for its ongoing, systematic, and egregious religious freedom violations. USCIRF published a country update highlighting Iran’s escalation of religious repression in 2021.