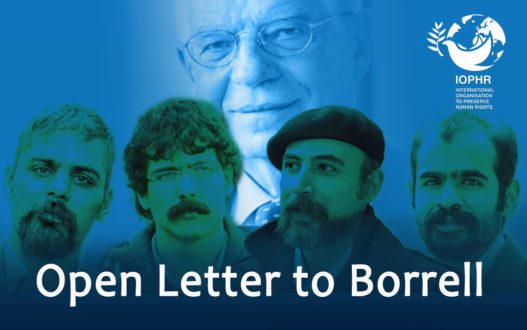 Shabtabnews – In an open letter to Mr. Joseph Borrell IOPHR stated : “As you are aware and you have already been informed through numerous correspondences, the human rights situation in Iran is rapidly deteriorating. Especially, since, the arbitrary arrests, extrajudicial killings and the violation of the rights of Iranian citizens have become a daily routine of the Iranian authorities in the face of global passivity and indifference, which in itself can be considered a type of appeasement of the inhuman actions of the Iranian regime.

“This ruling totalitarian regime has tried to eradicate ethnic and religious diversity in Iran. Along with the Baha’is, Jews, Christians, followers of Al-Haqq, and many others.

“The Gonabadi Sufis, with tens of millions of followers, are one of the religious groups that have suffered the most severe blows from the Iranian regime. These pressures intensified especially after Dr. Noor Ali Tabandeh, a liberal and moderate politician became the leader of the Gonabadi Sufis. Dr. Noor Ali Tabandeh focused his efforts on the spread of peaceful teachings among millions of Gonabadi Sufis, in the hope of ending the belligerent policies of the Iranian leaders in the mid-2000s. His teachings challenged and practically thwarted the ruling regime’s efforts to militarize Iranian society.

“Accordingly, the IOPHR writes to you in the hopes that, through your constructive attention to this issue, the release of the imprisoned Sufis will take place after four years of captivity.

The IOPHR also requests that, in addition to the two axes of the Iranian regime’s efforts to acquire nuclear weapons and dangerous missile programs, the very complex and critical dilemma of the human rights situation should also become the third axis, and a priority in any discussions with Iranian regime.”

For full text of the letter see below link: