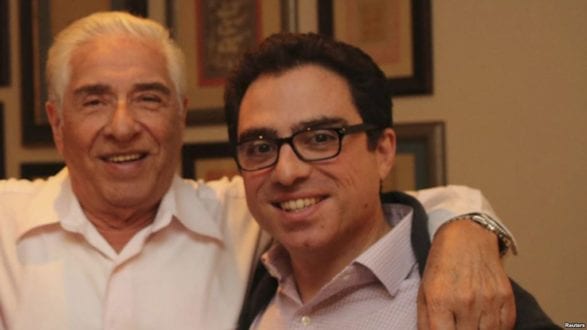 Iranwire- Iranian-American Baquer Namazi, who has been detained in Iran since 2016, underwent surgery on Tuesday, October 26 to clear a life-threatening blockage in an artery to his brain.

Prior to the operation, Namazi’s son Babak had pleaded with Iranian authorities to lift the travel ban on his father so he could receive medical care overseas. Babak’s brother Siamak Namazi is also jailed in Iran after being arrested in autumn 2015 during a business trip to Tehran.

The Namazis’ attorney, Jared Genser, said the operation “appears to have been a success and Baquer is awake, although he remains groggy.”

While the family were pleased that the operation went well, Genser said, “Dire concerns remain about the quality of aftercare available in Iran, the significant risk of Covid-19 exposure in the hospital, and the need for a stress-free environment for recovery, all of which threaten Baquer’s survival and long-term well-being.”

Baquer Namazi will remain in intensive care for two more days befor being transferred to a general recovery ward.

Speaking on October 13, the six-year anniversary of his father’s arrest, Babak Namazi said: “I will continue to fight and fight until the last breath I have, and until I embrace my brother and father once again.

“We have learned and continue to learn that there is no limit to the cruelty that the Iranian Revolutionary Guards can unleash on innocent and vulnerable people, including a frail 85-year-old man who endured cruelty beyond comprehension – years of captivity, extended solitary confinement, multiple heart surgeries while in custody and even being shackled to his hospital bed,” Babak Namazi’s statement continued.

Babak Namazi also highlighted the United States’ government’s failure to release his brother and father. “We learned that let-downs can be from all sides: Americans can be left behind multiple times by their own government.” Three US presidents have served in the White House since the detentions.

Baquer Namazi, a former UNICEF representative, was detained in 2016 after he travelled to Tehran to visit Siamak.

The pair were sentenced to 10 years in prison on what the US, the UN and campaigners have described as trumped-up spying charges.

Siamak Namazi remains in Iran’s infamous Evin Prison, which has come under fire for prisoner starvation, violence and medical neglect over many years.

Earlier in October, Genser submitted a brief to the UN saying that Iran’s latest actions once again violated Namazi’s rights. He reiterated his demand that Iran permit Namazi to leave the country and be reunited with his family.