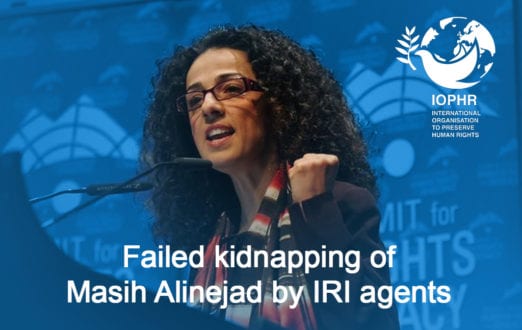 IOPHR’s statement regarding the failed kidnapping of Ms. Alinejad by agents of the Islamic Republic of Iran

Shabtabnews – In a statement IOPHR while condemning the recent attempt to kidnap Ms. Alinejad by agents of Islamic Republic of Iran, stated that: “The regime of the Islamic Republic of Iran, from the very first days of its establishment, has consistently attempted to eliminate its opponents inside and outside the country, by measures such as assassinations, kidnappings and executions. According to some statistics, at least more than three hundred cultural, political and human rights activists, who have opposed the Iranian regime have been murdered outside of Iran’s borders by the Regime.”

IOPHR also stated that: “Iran, under the rule of the Islamic Republic, has long been recognized as one of the most dangerous countries in the world for journalists, and according to numerous published reports, it is on the blacklist of six or seven most treacherous countries in the world for journalists and reporters. According to these reports, the Iran ruling regime has the highest number of journalists killed in the world during the last half century, and a recent example of such dangers is the case of two young environmental journalists who were covering the illegal activities of the Revolutionary Guards who were then killed in a suspicious bus accident.

The statement concluded by calling : “on all governments that feel responsible for international security, to minimize the level of their diplomatic relations with the ruling regime in Iran, and at the same time to impose political and diplomatic sanctions, in addition to economic sanctions. In order to force the ruling regime in Iran to comply with international accepted protocols, values and principles of relations.

“The IOPHR also notes that, given that dealing with criminals and mafia gangs involved in human and drug trafficking is a crime, any interaction or even negotiation with the Iranian regime officials that has links to mafia gangs should be avoided at all costs. Therefore, IOPHR calls on all legislatures around the world, especially the European Parliament, to pass laws to limit the interaction of government officials with the Iranian regime.

“The IOPHR as in the past, notes that widespread and universal support for human rights in Iran is the only solution to the problem posed by the Islamic Republic of Iran, and therefore urges all EU and all governments to put these issues at the centre of any negotiations and interaction with the Iranian ruling regime.”