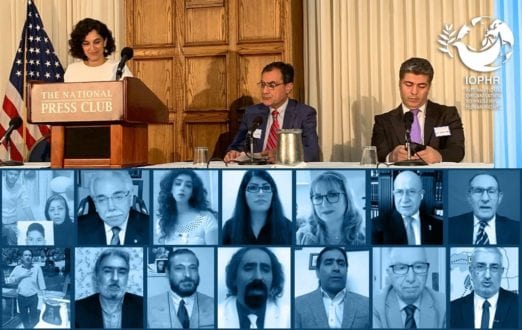 The State Of Human Rights In Iran by National Press Club

Shabtabnews – US Representative of IOPHR, Hamid Gharagozloo, was one of the speakers at the 30th June event “The State of Human Rights in Iran: Live Reports from Iran by Eyewitnesses & Experts” which was organised by National Press Club and held in Washington D.C. The full video of the event can be seen here.

During the event many prominent speakers from all over the world shared their views about the harrowing aspects of the Iranian regime and its current Human Rights situation.

At the event the IOPHR representative declared that:”The West’s misguided policies gave us Khomeini, thereby turning Iran into the largest prison the world has ever seen. President Obama’s ill-judged policies directed by Khamenei’s lobbyists gave a renewed life to Khamenei and his regime at a time when the end to this nightmare was imminent. And now, despite Khamenei’s appointment of a mass murderer as president, the international community has yet to officially condemn the sham election that is in blatant violation of international law and cut off diplomatic and economic ties with an occupying force holding a nation hostage.”

The IOPHR representative ended his speech by stating that: “It is incumbent upon the democratic nations of the world to be on the right side of history and stand by the people of Iran. A free and democratic Iran would benefit not only its people but the world at large, bringing stability and prosperity to the region and beyond.”

For full report on the event see below link: