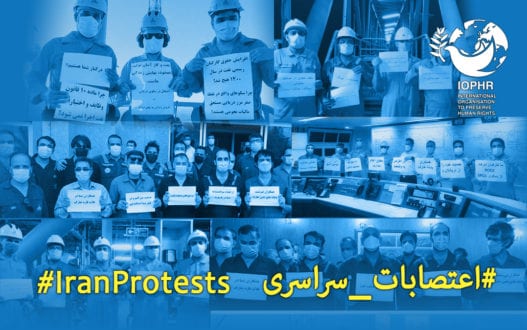 IOPHR Statement in Support of the Nationwide Strikes in Iran

Shabtabnews – In a statement IOPHR expressed support for nationwide strikes in Iran by stating: ” the IOPHR would like to point out that considering the fact that the regime of the Islamic Republic has worked to thwart strikes and prevent legal rights of Iranians to strike, the officials of this system can never be relied on as the arbitrator of legality and justification of the strike; especially in the wake of recent widespread strikes throughout the country. Therefore, any attempt by the Iranian regime to act in such manner must be met with suspicion and be seen as means of violating “citizenship right” to strike.

“The IOPHR also notes that the establishment of trade unions independent of the rule of law is a specific right of Iranian citizens under international conventions, especially the conventions of the International Labour Organization, which Iran has signed, but has acted contrary to its commitments. Furthermore, the Iranian regime also has refused to make the necessary amendments to the relevant national laws. Consequently, any disruption or sabotage by the government in the establishment and operation of trade unions and trade unions independent of the government should be considered a violation of civil rights and be strongly condemned.

“In conclusion, the IOPHR, while announcing its full support for the nationwide strikes of workers, teachers, students, employees and other oppressed sections of Iranian society, calls on all labour organizations and unions around the world to declare widespread support for nationwide strikes in Iran. Moreover, it urges these organisations to help their brothers and sisters in Iran as much as possible, by pressuring their respective governments to reduce political and economic ties with the ruling regime in Iran, which according to the latest election results clearly lacks legitimacy. “