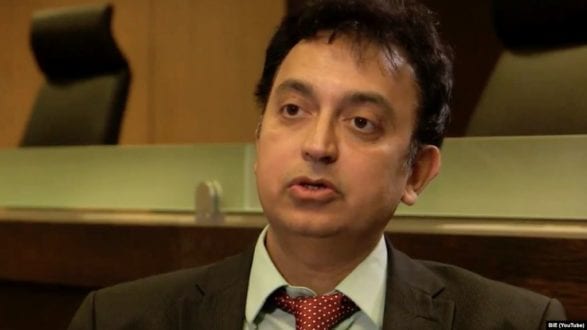 Iran-HRM – The UN Special Rapporteur on Human Rights in Iran called for an independent inquiry into the state-ordered executions of thousands of political prisoners in 1988 and the role played by Ebrahim Raisi as Tehran deputy prosecutor.

In an interview with Reuters on Monday, June 29, Javaid Rehman said that over the years his office has gathered testimonies and evidence. It was ready to share them if the United Nations Human Rights Council or other body sets up an impartial investigation.

The U.N. investigator on human rights in Iran, meanwhile, said he was concerned at reports that some “mass graves” are being destroyed as part of a continuing cover-up.

“I think it is time and it’s very important now that Mr. Raisi is the president (-elect) that we start investigating what happened in 1988 and the role of individuals,” Rehman told Reuters on Monday.

A probe was in the interest of Iran and could bring closure to families, he said, adding: “Otherwise we will have very serious concerns about this president and the role, the reported role, he has played historically in those executions.”

In 2019, the U.S. Treasury under President Donald Trump sanctioned Judiciary Chief Ebrahim Raisi “for his administrative oversight over the executions of individuals who were juveniles at the time of their crime and the torture and other cruel, inhuman or degrading treatment or punishment of prisoners in Iran.”

Raisi, when asked about allegations that he was involved in the killings, told reporters: “If a legal expert, judge or prosecutor has defended the rights of people and the security of the society, he must be lauded and encouraged… I am proud to have defended human rights in every position I have held so far.”

In recent weeks, numerous articles have covered his background, and international organizations have called for and independent inquiry and his case to be investigated for human rights abuses.

Raisi is notoriously renowned for his role in the 1988 massacre of political prisoners in Iran. At the time, as deputy prosecutor general of Tehran, Raisi sat on the “death committee,” a group of officials that summoned political prisoners and sent them to the gallows if they did not repent their opposition to the mullahs’ regime.

At that time, Grand Ayatollah Hossein Ali Montazeri, a former deputy to Iran’s first Supreme Leader Khomeini, condemned the killings, saying in an audio recording: “In my view, the biggest crime in the Islamic Republic, for which the history will condemn us, has been committed at your hands, and they’ll write your names as criminals in the history.”

Iran has never acknowledged that mass executions took place under Ruhollah Khomeini, the revolutionary leader who died in 1989.

“The scale of executions that we hear imply that it was a part of a policy that was being pursued…It was not just one person,” Rehman said.

Killing of protesters in November 2019

Javaid Rehman said there had also been “no proper investigation” into the killing of protesters in Nov. 2019, the bloodiest political unrest since the 1979 Islamic revolution.

“Even by conservative estimates we can say that more than 300 people were killed arbitrarily, extrajudicially, and nobody has been held accountable and no compensation,” he said.

“There is a widespread and systemic impunity in the country for gross violations of human rights, both historically in the past as well as in the present.”