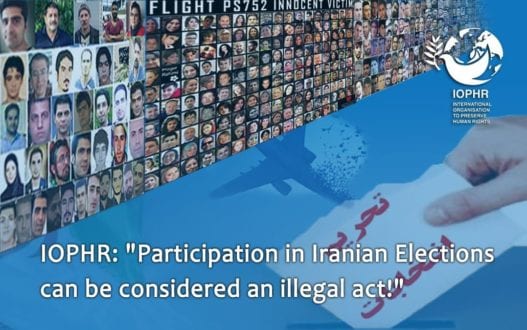 IOPHR : ” Participating in Iranian election can be considered an illegal act”

Shabtabnews – In a statement the International Organisation to Preserve Human Rights (IOPHR) stated that : ” the qualification of presidential candidates in the current election, some of whom have criminal records for forgery and murder, and some of whom, are wanted in foreign courts for murder and other charges, with international arrest warrants against them clearly invalidates this election, and puts legitimacy of the current election even more under question. As participating in this election can be considered an illegal act that in theory could lead to legal prosecution of voters in the post-Islamic Republic.”

The statement also stated that in Iran: ” political power as well as public assets have been concentrated in the hands of a person called the “leader” or the Supreme Leader, through various manipulations of the Iranian constitution. The Leadership is elected by the members of the Assembly of Experts, who are themselves appointed by the Guardian Council, and the members of the Guardian Council are, of course, appointed by the Leadership. Thus, there is a vicious rotation of cycle of power in Iranian politics, which does not include the presidency and members of the cabinet and parliament. Therefore, whether or not the people vote is irrelevant in terms of the effect of the vote on the policy-making of the Islamic Republic.

“It also should be noted that the presidential institution in Iran has no legal authority to run the country, and thus participating in the presidential elections in Iran, even with the most optimistic view in mind, is simply to participate in the election of a person whose authority is less than the authority of even a low-level member of the Leadership.”

The statement also stressed that :”It should not be forgotten that the leaders of the Islamic Republic, themselves face serious terrorist charges on the international level, and some of whom have also faced long prison terms. Therefore, by trying to persuade the public to the polls, these people are in effect making the ordinary Iranian people also share in the international crimes they have committed, thereby tainting the honourable people of Iran in the eyes of the international community, which may in turn view all Iranians as a terrorists and Iran as an uncivilized nation.”

It also urged ” every honourable person in Iran to think carefully about these issues and refrain from taking part in the current presidential election.”