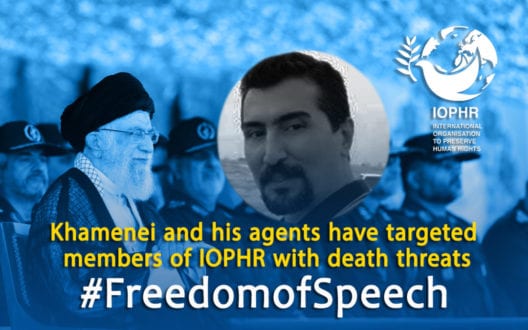 Shabtabnews – At the Weekly IRF Roundtable meeting, the IOPHR representative and Chair of the Iran Action Group presented a report on Death Threats Against IOPHR Members by the Iranian regime.

The report states that: “As the tragic comedy of the presidential election in Iran looms, Ayatollah Khamenei and his occupying regime, faced with a nation determined to send a loud and clear message to the world by refusing to participate in the election and thereby ejecting his rule, is becoming more desperate and dangerous by the day. His regime’s vicious tactics to force the nation to participate in the sham election range from coercion, violent oppression, and threats, to withholding the COVID-19 vaccine from a desperate people.

It has been a long time since Khamenei last realized how fragile his rule has become and the critical role  Gonabadi Sufis have played in the resistance to his regime. Under the guidance of the late Dr. Noor Ali Tabandeh as their spiritual leader, the Gonabadi Sufis awakened the long-suppressed power of the people to stand up, through a unified and peaceful protest, against one of the most oppressive regimes in the world. It was exactly on February 21, 2009 that tens of thousands of Gonabadi Sufis from all across Iran gathered in front of the parliament to peacefully protest the vicious oppression of the Sufis, which included violent attacks, arrests, tortures, and murders, and the destruction of their places of worship and homes. Up until then, hopelessness and a grave-like silence had ruled the lives of a nation under siege, much like the Soviet Union of the Stalin era. But the Sufis’ protest broke the façade of Khamenei’s absolute power and proved to people of Iran, and the whole world for that matter, that it is possible to stand up even to the most vicious oppressor through unity and peaceful protest, and paved the way for others to follow suit.”

The report also added that : ” Over the past several months, members of the Basij forces have sent graphic death threats to Dr. Azmayesh through messages on social media. A few days ago, another member of IOPHR received a disturbing message full of obscene profanity from someone named Farshid Mahjoubi, threatening the IOPHR member and his family as well as  other members of the IOPHR, and Dr. Azmayesh.

What is particularly concerning about this latest threat is that the caller: (1) is the son of a ‘so-called’ Sufi teacher within the Gonabadi Sufi Order who has close ties to the regime-appointed leader of the order, granting him impunity and vast resources to carry out his mission, (2) announces that he has a Fatwa, meaning that at least one of the regime’s Ayatollahs has issued decrees (Fatwa) for the assassination of Dr. Azmayesh and other members of IOPHR and (3) condemns IOPHR for its activities and brands its members as enemies of the state and subsequently, enemies of the regime-controlled Sufi Order, confessing to the fact that what is called the Gonabadi Sufi Order today is, in fact, an extension of the Basij forces carrying out the regime’s objectives.”

For full text of the repot see below link: