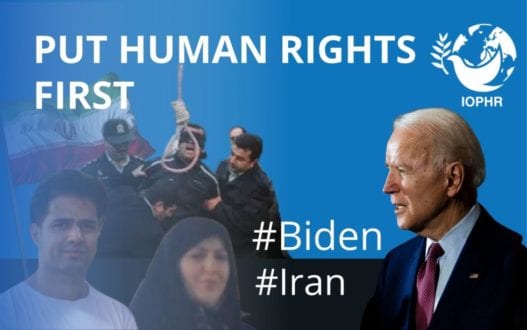 Shabtabnews – A statement by IOPHR emphasises the necessity of Human Rights as a Key Component of the US Negotiations with Iran.

The statement highlights a series of recent gross violations of human rights by the Iranian regime such as the murder of Behnam Mahjoubi, a Gonabadi Sufi in prison, the execution of Ms. Zahra Esmaili based on false confession and the shameless hanging of her lifeless body, the executions of 33 Baluchis based on false confessions, the arrest of over 110 Iranian Kurds , the oppression of Baha’is at an alarming rate, and the recent addition of Articles 499 and 500 to Volume 5 of the regime’s Penal Code, which enables the regime to brand any group as a cult or sect at will, the existence of which is illegal and bears harsh penalties.

After which IOPHR “urges President Biden and his administration and the U.S. Congress to prioritize Human Rights as a key component of their negotiations with the regime in Iran. As free and democratic Iran would benefit not only its people, but the world at large, bringing stability to the region and beyond.”

For full text see below link: