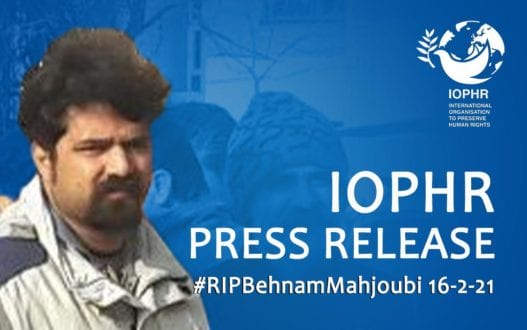 IOPHR’s statement in connection with the cowardly murder by the Islamic Republic of Iran of Mr. Behnam Mahjoubi whilst in prison

shabtabnews – In a statement IOPHR condemned the ‘cowardly murder by the Islamic Republic of Iran of Mr. Behnam Mahjoubi whilst in prison.’

The statement stated that the treatment of Mr Mahjoubi was not only violation of international treaties on treatment of prisoners, which Iran is a signatory to, but it was also in violation of Iranian domestic laws. Moreover, the statement also noted that Mr. Behnam Mahjoubi had previously given a shocking account of his torture in a psychiatric hospital in an audio file released, after he was finally returned to Evin Prison.

The statement ended by calling “on all democratic governments, especially members of the European Union, to reduce all economic, political and diplomatic relations with the ruling regime of Iran to the bare minimum. In order to show solidarity with those Iranians who are suffering at the hands of the brutal Iranian regime, and put pressure on the Iranian regime to stop its policy of systematic oppression of minorities, or anyone who opposes the extremist agenda of the Iranian regime.”