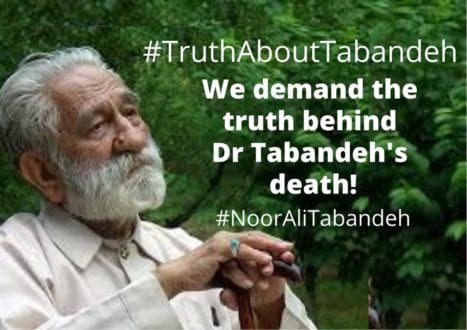 The campaign to seek the truth behind Dr Tabandeh’s death.

Shabtabnews – Over the last few days there has been widespread international social media campaign amongst the followers and supporters of Dr Noor Ali Tabandeh demanding the truth behind the circumstances of his death.

Dr Noor Ali Tabandeh was a well know Iranian human rights activist as well as the spiritual leader of the largest Sufi order (The Gonabadi Sufi order) in Iran. During his life he was well known for his human rights advocacy and was imprisoned for his pro-human rights views during the 1980s.

Dr Tabandeh was kept under house arrest during the last two years of his life by regime’s security forces who had infiltrated the Sufi community. Which lead to an international campaign and signed petition for his release.

During his house arrest, according to his own testimony, he was  poisoned on number of occasions, and finally due to lack of physician care was hospitalised in November 2019, where he, under suspicious circumstances, finally passed away in hospital on 23rd December 2019.

Following his death he was quickly buried in a secure and suspicious way without any of his supporters being allowed to see his body, or without any formal medical examination being carried out by any medical examiner.

As result of these series of suspicious circumstances the supporters of Dr Tabandeh after receiving no clarity from those responsible for his care have began a social media campaign in the search of truth behind his death under #TruthAboutTabandeh and #NoorAliTabandeh.

The below images are examples of his supporters from all over the world demanding justice and truth about his death from the relevant authorities.