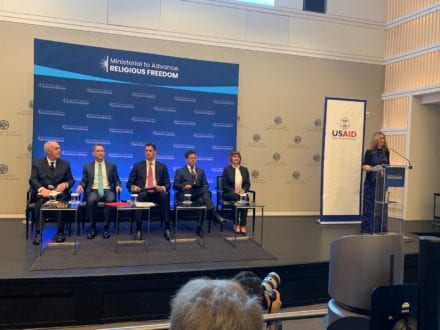 The closing ceremony of annual meeting to Advance Religious Freedom

Shabtabnews – The second annual meeting to advance religious freedom ended by statement from Sam Brownback, US Ambassador-at-Large for International Religious Freedom on the importance of combating religious oppression on worldwide basis. Mr Brownback also mentioned the importance of number of global grassroots movements in support of religious movements and urged for positive actions by governments to support religious tolerance.

Earlier in the day US Vice-President addressed the conference on importance of religious freedom over the world.

Following the conference the US state department issued a statement on US concerns on religious freedom in Iran. In this statement they urged Iran to uphold the rights of religious minorities and in particular the rights of Christians, Bahias and Gonabadi Sufis .