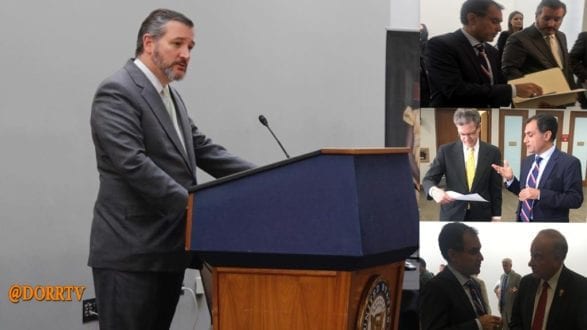 In this gathering which was attended by Senator Ted Cruz and by Sam Brownback, the United States Ambassador-at-Large for International Religious Freedom, there were detailed discussions on human rights violations committed by the Iranian regime against religious minorities in Iran.

During this meeting which was attended by Dr Hamid Gharagozloo the representative of IOPHR (International organisation for preservation of human rights), the plight of religious minorities in Iran was discussed, and Dr Gharagozloo Presented the members of the committee with a recent report prepared by IOPHR on the state of human rights conditions in Iran.

In this report, the recent conditions of various religious minorities, like Bahia’s, Christians and in particular Christian converts are outlined. This report further highlights the condition of other religious minorities like the Sunnis and Sufis. The Iranian regime’s clampdown on Sufis has intensified recently with 10 month house arrest of their 92 year old leader of Gonabdai Sufis, Dr Noor Ali Tabandenh, and imprisonment and torture of hundreds of their members including men and women, two of whom were killed in 2018 by the regime forces.

The report by IOPHR which can be viewed via the below link was formally presented to both Mr Sam Brownback and Senator Ted Cruz.

In this gathering, Senator Ted Cruz, also highlighted in his speech the violations of the regime against Christians in Iran and how they are consistently suppressed by the Iranian regime.