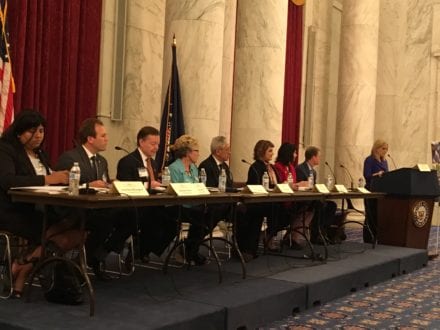 US Report highlights plight of religious minorities in Iran

IOPHR – On 29th April 2019, US annual report on international religious freedom highlighted the oppression suffered by religious minorities in Iran and China.

In the meeting after the publishing of the report, Hamid Gharagozloo, the US representative of IOPHR (International organisation to preserve human rights), gave a speech on the grave conditions faced by various religious minorities in Iran, for example the persecutions of Baha’is, Christian converts and even some of some Muslim minorities like the Sufis in Iran.

In this meeting which was attended by Gary Bauer, a member of the U.S. Commission on International Religious Freedom, Mr Gharagozloo discussed issues like China’s dealings with Mullah Regime of Iran, which are to the detriment of Iranian people and Iranian foreign influence and infiltration of various Iranian and non-Iranian groups abroad.

In this meeting Mr Gharagozloo also highlighted IOPHR’s various human right activities, for example its campaign to raise global awareness of the plight of religious minorities in Iran, which was successful in annulling the death sentence of Dr Taheri (the leader of Erfan Halgeh spiritual movement) and instrumental in his recent release, after nine years of solidarity confinement.

2019 US report on global religious freedom