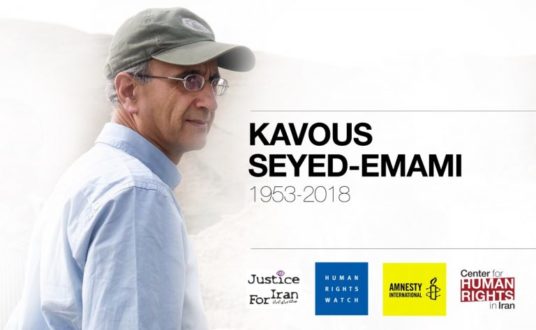 CHRI – Kavous Seyed-Emami’s widow, Maryam Mombeini, filed the suit on March 6, 2019, against Amir Nasseri, the judiciary’s security chief at Tehran’s Evin Prison where her husband died while held in solitary confinement there for interrogations in February 2018.

“From now on, we are going to file objections everywhere we can against this unlawful travel ban so that eventually someone will listen and give us an answer,” Mombeini’s son Ramin Seyed-Emami told CHRI on March 12, 2019.

“What’s strange is that Iranian authorities don’t even respect their own laws,” he added. “The travel ban is illegal because my mother has not been charged with anything.”

Mombeini, who also holds Canadian citizenship, was prevented from leaving Iran on March 7, 2018, as she was waiting to board a flight to Canada with her two sons. Ramin and her other son Mehran were eventually able to board but Mombeini’s passport was confiscated without explanation.

“When we went to inquire about lifting the ban, Mr. Nasseri’s office told us they would give a response within a week,” said Ramin Seyed-Emami. “Then when my mother went there last week, she realized that the ban had been extended.”

Attorney Payam Derafshan, who represents the family, told the Islamic Republic News Agency (IRNA) on March 12, 2019, that the travel ban was not only illegal but was extended without giving Mombeini a chance to appeal.

“The ban is still standing despite the end of investigations and lack of any charges against my client,” said Derafshan. “We filed several requests to meet the judiciary’s security official at Evin Prison but he refused.”

His death, which occurred within two weeks of being held virtually incommunicado for interrogations in Evin Prison, was reported to his wife as a “suicide” on February 9, 2018, after security agents interrogated her.

No final autopsy report was made public but a preliminary State Medical Examiner’s report did show evidence of an injection on his skin as well as “bruises on different parts of the body,” according to one of the Tehran-based lawyers representing the family.

Iran’s State Prisons Organization and the judiciary to which it responds, as well as prison officials, are responsible for the health and wellbeing of detainees. But one year after Seyed-Emami’s death, no one has been charged, prosecuted or held accountable.

Iran has also ignored international calls for an independent and impartial investigation into Seyed-Emami’s death, for his wife to be allowed to leave Iran, and for his colleagues to be given a fair trial.

Instead, for the past 12 months Tehran Prosecutor Abbas Jafari-Dolatabadi has been working on a case against Seyed-Emami’s detained PWHF colleagues based in part on false “confessions” despite three major state agencies contesting accusations that they committed espionage.

Iran’s Chief Judge Says ‘We Will Meet’ Soleimani’s Killers, But Not For Talks