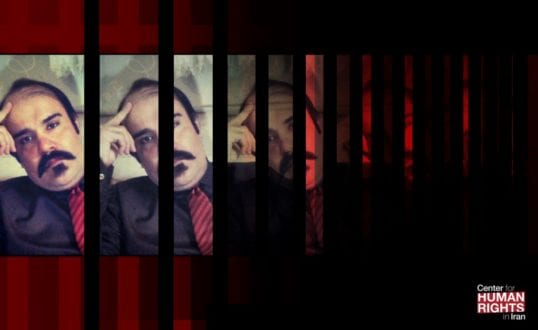 Vahid was held in Qom Central Prison and had been on hunger strike in protest to his prison conditions and his unjust sentence since October 13. During the past year, several imprisoned civil rights activists have been on a hunger strike protesting against the lack of due process, unfair trial, and prison conditions.

Iran Human Rights (IHR) calls on the international community for an immediate action to save other Iranian prisoners’ lives who are still on hunger strike. “We call on the international community for urgent attention to the prison conditions and especially the situation of prisoners of conscience in Iran,” said IHR director, Mahmood Amiry-Moghaddam, “imprisonment for expression of his opinion following an unfair trial, poor prison conditions and indifferent attitude towards the prisoner’s health were the causes of Vahid Nasiri’s death. The Iranian Judiciary and the Supreme Leader Ali Khamenei are responsible for Vahid Sayadi Nasiri’s death and the condition of other prisoners of conscience and must be held accountable.”

According to the IHR sources, Vahid Sayadi Nasiri, 38, had arrested three times in recent years for his posts on the social media. One of the Vahid’s relatives told IHR, “following his first arrest, Vahid spent two years in prison. The second time, more than a year; and he was released on March 16, 2018. However, he was arrested again on July 23… We have been told that he was arrested for the political activities by his cell phone (on the social media).”

In the latest arrest around four months ago, he was transferred to Qom Central Prison. In contrary to Iranian prison regulations which emphasize the separation of prisoners according to the classification of the charges, Vahid was held among prisoners with heavy criminal charges. Of note, Iranian authorities regularly send the political prisoners to criminal wards to put more pressure on them.

To protest the indifferent behaviour of the authorities toward his request of transferring to a related ward, Vahid went on hunger strike on October 13, 2018. Following the start of his hunger strike, he was sentenced to Four and a half years of imprisonment by branch one of the Qom revolutionary court. According to close sources, the authorities didn’t approve his choice of the defense lawyer and he had to appear in front of the Court without a lawyer. The trial at the Revolutionary Court lasted for few minutes. Vahid continued his hunger strike protesting the unfair trial.

Spreading propaganda against the Iranian regime, insulting the Supreme leader and Islamic beliefs, were among the charges the Revolutionary Court used against him.