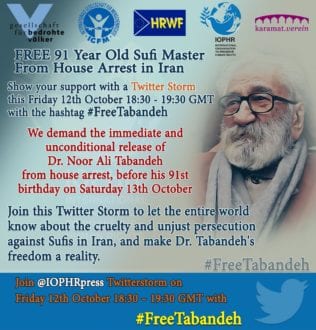 Shabtabnews- On Friday 12th October, there will be worldwide twitter campaign between 18:30-19:30 GMT under #FreeTabandeh tag, to demand the immediate release of human right lawyer and the spiritual leader of Gonabadi Sufi’s, Dr Tabandeh from house arrest.

This campaign is organised by IOPHR, a day before the 91st birthday of Dr Tabandeh, as to raise awareness of Dr Tabandeh’s eighth month house arrest by the Iranian authorities.