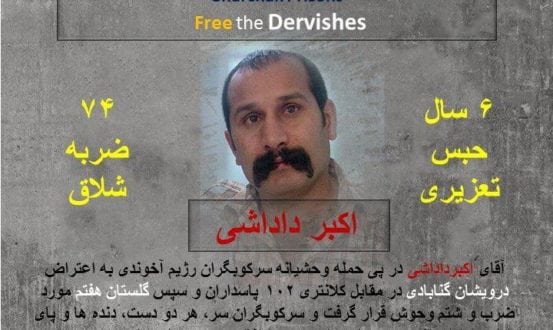 Shabtabnews – As part of the systematic  Stalinist type trials by the Iranian authorities against any type of association with Sufism, Mr. Dadashi was sentenced to 6 years in prison and 74 lashes, all in space of  a few minutes  by the Iranian judiciary! All because he has supposed to have served tea in Sufi gatherings!

As a result, Akbar Dadashi  also joined the number of other Sufis on hunger strike protesting the treatment of imprisoned women Sufis and demanding their immediate release and also the end to the house arrest of Gonabadi Sufi spiritual leader  Dr. Noor Ali Tabandeh, whose health deteriorates everyday due to lack of medical attention and his house arrest.

Mr Dadashi is also part of the long list of other Sufis who where injured during the February attack of Iranian authorities against Sufis. He  suffers from impaired  mobility and lack of ability to control and move his legs, arms, shoulders and fingers, as a result of lack of medical attention following the injuries he received during his  hasty arrest.

As all injured Sufis were hastily transferred to the jail without medical attention, where they have been kept intolerable conditions during the last eight months. Some of whom have unattended bullet wounds, as result of  Iranian authorities  firing on them despite they being unarmed at the time.