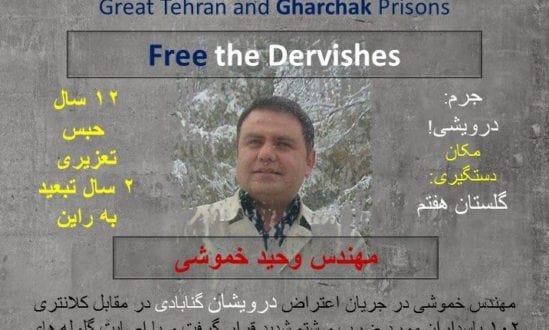 Shabtabnews – The trials of the Gonabadi dervishes and the issuance of heavy sentences during  short trials, which lasted several minutes for each Sufi, has aroused serious objections from the Sufis, their families and from protesting public opinion and the general legal community.

Mr. Vahid Khamooshi, who is a designer and technician of industrial and construction structures, was arrested during the protest of the Gonabadi Dervishes, which was orchestrated by Iranian security forces in front of the home of the leader of Gonabadi Sufis, Dr. Nour Ali Tabandeh.  Mr Khamooshi during this protest was beaten and received head injuries and fractured ankle from bullet wounds, and was  transferred to the prison without receiving medical attention. After which he was quickly without due process was sentenced to 12 years imprisonment and 2 years of exile.

He stated during a call from inside the prison: “The verdict was issued only verbally, and I have no information about the proceedings, and so far I have not been able to obtain the file number of the case, and I have not received any information about my case from  the prison staff. The authorities  have also  even thrown out my lawyer who was looking into my case.” Mr Khamooshi  has suffered  terrible injuries and suffers from from serious health conditions as result of his treatment by  the prison authorities.

The detained Gonabadi Sufis, as the result of Golestan Seventh protest in February, have been sentenced by the  Revolutionary Courts to a total of 2000 years of imprisonment, tens of thousands of lashes, and hundreds of years of deprivation from social activities and forced exile.