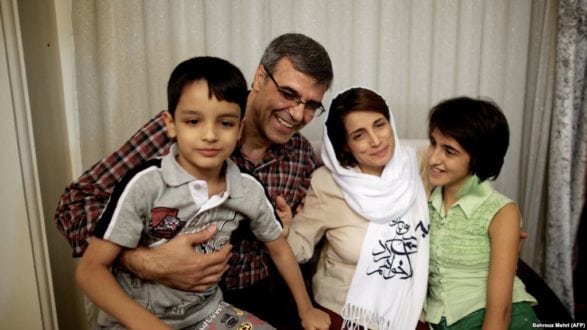 Sotoudeh was arrested June 13 after publicly defending the young women who had challenged the compulsory hijab law by removing their headscarves on a busy Tehran street in protest. Sotoudeh’s husband Reza Khandan was later detained early September after telling journalists that Intelligence Ministry agents had threatened him with imprisonment over the phone.

In a Facebook post, former senior member of President Mohammad Khatami’s administration, journalist, and political activist Eisa Saharkhiz wrote, “On Sunday, September 16, while Sotoudeh’s children were waiting to meet their mother for a visit at the prison, they were not called up, and one of the children, Mehraveh, was admonished and threatened [by prison staff] for not fully respecting the hijab law.” She is a teenager.

Citing a “well informed source,” Saharkhiz noted in his post, “An individual who introduced himself as the director-general of the visitors hall in Tehran’s notorious Evin Prison threatened the fourteen-year old Mehraveh Khandan, telling her that if she did not fix her hijab, he would not allow her to enter the hall.

However, according to Saharkhiz, Mehraveh’s hijab was the same as in her previous meetings with her mother.

“It seems that after arresting Mr. Khandan, the intelligence authorities have decided to increase the pressure on Reza and Nasrin’s children whenever they are allowed to meet their parents,” Saharkhiz wrote.

Sotoudeh has reportedly refused to admonish her daughter in writing as her jailers have pressured her to do, and is refusing to enter the visitor’s hall or speak to her relatives on the phone until her daughter is allowed to visit without being harassed about her hijab.

The prominent human rights lawyer has been on hunger strike since September 6, warning that she would neither halt her strike nor go to the prison’s medical clinic for monitoring until her husband is released from police custody unconditionally.

On September 9 Sotoudeh collapsed on the stairs of the prison block from severe low blood pressure.

This is not the first time that Sotoudeh’s relatives have been threatened.

Almost six years ago, Khandan announced that he had been summoned to the court based in Evin Prison after complaining about mistreatment of his wife in prison.

Sotoudeh, who has been detained and imprisoned in the past, is currently charged with “assembly and collusion against the establishment,” as well as with promoting “propaganda” against the regime.

In an exclusive interview with Radio Farda before his arrest, Khandan said his wife had been sentenced under Article 510 of the Islamic Penal Code, which is related to “espionage for hostile governments.”

Her defense team said no espionage charge was ever included in her charge sheet, which instead listed other charges including “propaganda” against the regime.

Immediately after Khandan was arrested, the U.S. State Department and human rights groups expressed their shock and outrage. A September 4 tweet by the State Department’s Persian Twitter feed said the Trump administration is “deeply shocked and alarmed” by Khandan’s arrest. “We have to ask the Iranian government, what are you really afraid of?” the tweet read.

“The Iranian authorities must immediately and unconditionally release both Nasrin Sotoudeh and Reza Khandan,” Luther said, adding, “They must drop all charges against them and stop their harassment of this family once and for all.”

The New York based Center for Human Rights in Iran (CHRI) argued that multiple elements of the Iranian establishment were to blame for the situation.

“The intelligence ministry, which reports directly to Iranian President Hassan Rouhani and was responsible for Khandan’s arrest, has become one of Iran’s major human rights violators while Rouhani stands by silent,” CHRI executive director Hadi Ghaemi said in a separate online statement.