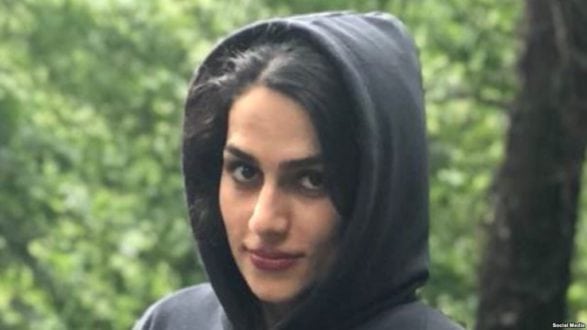 Though a DNA test is still needed, Ms. Faraji’s relatives have identified her body by recognizing her teeth and marks on her neck, Aghasi said.

Pointing to local laws and regulations that ban him to provide more details, Aghasi said, “A suspect related to the case has been detained.”

Earlier, Aghasi had noted that he did not rule out murder.

Maryam Faraji, a graduate student of international management and financial manager of a company in city of Shahriar, 42 km (36 mi) west of the capital, Tehran, was last seen on Thursday, July 5, after leaving her father’s home in western Iran, close to the Iraqi border.

Earlier, on January 2, in the heat of widespread uprising against the Islamic Republic’s establishment, Maryam Faraji had been detained for ten days and gone under interrogation in the Intelligence Ministry Ward 209 in Tehran’s notorious Evin prison.

At least 3,700, including hundreds of students were arrested during last December and January protests across Iran, when tens of thousands of demonstrators chanted vitriolic slogans against the highest authorities of the regime.

Ms. Faraji’s trial was initially held on April 8, 2018, at the 26th Branch of the Revolutionary Court presided by Judge Masha’ollah Ahmadzadeh. The court sentenced her to three years in prison and banned her from leaving the country for two years. Ms. Faraji was later released on bail, waiting for the Court of Appeals’ decision on her case.

The activist’s mysterious disappearance was originally disclosed in a couple of tweets by her lawyer last Thursday.

“I do not rule out murder,” Aghasi had twitted, insisting that in no way he was pointing the finger at the intelligence and/or judiciary authorities of the Islamic Republic.

According to Aghasi, Ms. Faraji had left her father’s home in Sarpol-e Zahab, western Iran, close to Iraqi border, on Thursday. She disappeared on the way to Tehran. Her burnt body was found close to her car. Ms. Faraji’s personal effects, including her wallet and ID cards were untouched, social media reports claim.