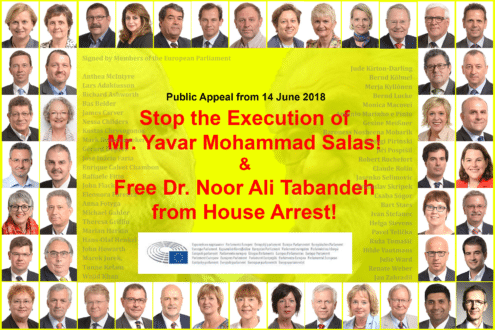 IOPHR – Over 40 MEPs  demand that the Iranian Regime upholds fundamental human rights, prisoners’ rights, the right to freedom of religion, thought and conscience, and restore Dignity, Freedom and Justice as set out in the international conventions and also to stop the execution of innocent Sufi, Mr Mohammad Salas, who has been wrongly convicted of killing three people during 19th February Sufi protest. The MEPs also demanded a retrial of Mr Salas and for the new trail to consider the documentary evidence proving his innocence.

The MEPs in their  statements also demanded that the Iranian regime stops their  suppression and persecution of Gonabadi Sufis solely due to their religious belief and release the leader of the Gonabadi Sufis Dr Noor Ali Tabandeh who has been under house arrest since February.

The full statement can be seen via the following link: