The Urgent request of the children of Mr Mohammad Salas to stop the imminent execution of their innocent father.

IOPHR – The Urgent request of the children of Mr Mohammad Salas to the world and human rights organizations to stop the imminent execution of their innocent father.

Narges and Ali Salas, the children of Sufi Mohammad Salas, in a video message to the world and human rights organisations, have asked for their urgent assistance in order to stop the imminent execution of their innocent father, who has been wrongly accused of driving a bus into crowd of people in 7th Golestan avenue of Tehran and killing three people. As there is credible proof that Mr Salas was actually arrested three hours before the incident took place in 7th Golestan Avenue of Tehran on 19th February.

The request for the retrial of Sufi Mohammad Salas, which “includes a 26-page of proofs including documents, films, photographs and evidence that clearly and unequivocally proves the innocence of Mr Salas in regards to events of the 7th Golestan avenue in Tehran, was filed by on behalf of Mr Salas by his attorney Ms. Zainab Taheri and sent to the Branch 35 of the Supreme Court under the chairmanship of Seyed Karimi on 22nd May 2018. The initial acknowledgment of these documents and further investigation by the authorities were reported by domestic and foreign media on May 20th 2018, but were quickly recanted and denied few hours later by the Iranian authorities. 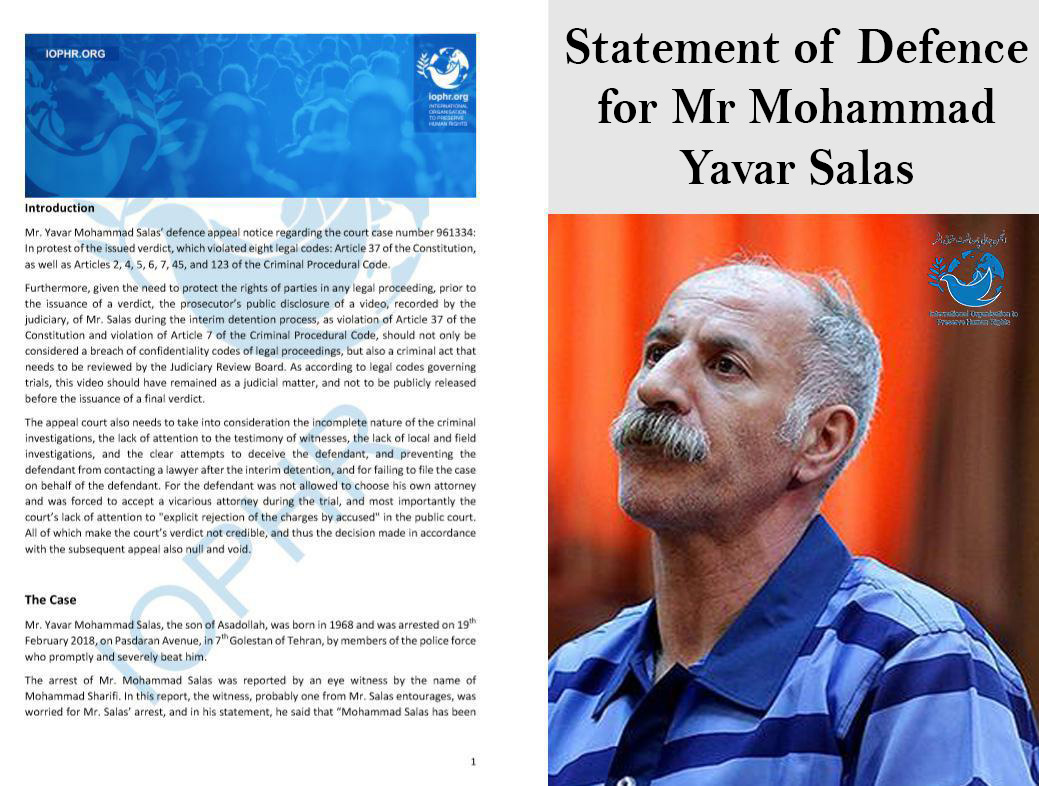 On 13th June a day after the Tehran Prosecutor’s stated in an interview that “Sufi Mohammad Salas will be executed after Ramadan,” Branch 35 of the Supreme Court stated that Mohammad Salas request for new hearing, which was received on 20th May has been formally rejected.

Thus, it’s clear that the authorities’ denial of receiving of the documents and consideration for a retrial were simply false. In fact according to reports the Branch, after examining the case, initially accepted the request for the restoration of the trial, but, just minutes after the publication of this news, the officials from the security agencies personally visited the Branch 35 of the Supreme Court and placed the head of this branch, Seyed Karimi, under extreme pressure to reject the case. Which finally resulted, on June 13th Tehran prosecutor, Jafari Dolatabadi, announcement that the request for a restoration of the hearing has been formally rejected.

According to the same report, Jafari, the Tehran Prosecutor’s Office ordered that the cruel verdict execution of the innocent Sufi, Mohammad Salas, to be carried out at Rajaishahr Prison, on Wednesday June 20th. Furthermore, Jafari Dawlatabadi stated that he would personally attend the execution of Mr Salas.

Meanwhile, various human rights supporters are gathered and are urging the members of European Parliament to ask the Iranian Regime to halt the execution of Mr Salas. In fact some of the same group of MEPs who signed the petition in support of Mr Salas in April have urged further action by the European Parliament.

The British MEP, Anthea McIntyre has sent an urgent action notice to her fellow MEPs urging them to ask the Iranian government to stop the execution of Mr Salas and also free the leader of Gonabadi Sufis, Dr Tabandeh, who has been under house arrest since February. The text of Ms McIntyre’s appeal can be seen below.