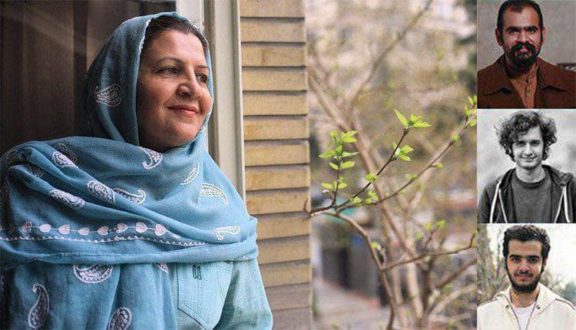 Dervish Mother And Three Sons In Poor Condition In Prison

Iran-HRM – The condition of Dervishes Shokoufeh Yadollahi and her sons Amir, Puria and Kasra Nouri has been reported as poor. The four were arrested during clashes between Dervishes and security forces in the Golestan Haftom region in Tehran.

They were severely beaten by security forces upon their arrest and after more than two months of detention are still denied medical treatment.

According to sources close to the Nouri family, Mrs. Yadollahi was initially released along with a number of other Dervish women but after the case interrogator realized that she was the mother of Kasra Nouri (a Dervish activist and editor of the Majzubian Nour Website), they detained her again and issued a 100 million toman (238USD) bail order for her.

“The detained Dervish women were told to sign a written announcement saying that they had received medical treatment”, an informed source said. “After that, 10 of the women, including Mrs. Yadollahi were told that they would be transferred to hospital but were instead transferred to the quarantine section of Shahre Rey Prison which is unsuitable and unhygienic for injured prisoners”, the source added. Reports indicate that Kasra Nouri, 27, Puria Nouri, 25 and 22 year old Amir Nouri are in need of urgent medical care.

Eyewitnesses have reported that one of Amir’s fingers was cut off during his arrest, Puria suffered a broken head, cheekbone and teeth while Kasra, who had been detained before this and served five years in prison, was severely beaten with a baton. The beatings were so severe that he became unconscious and went into a coma. He is currently detained in Fashafuyeh Prison.

Amnesty International released a statement on March 29, calling for the release of of 11 Yarsan women, from Iran’s Gonabadi Dervish religious minority, who were arrested and jailed in a protest in February and are being detained under inhuman conditions in Qarchak, aka Shahr-e Ray Prison, without any access to lawyers.

“On 19 February, security forces violently arrested at least 60 women from Iran’s persecuted Gonabadi Dervish community for participating in a protest in Tehran which turned violent after security forces resorted to beatings, firearm use, water cannons and tear gas to disperse the crowd. The women were taken to Vozara detention centre where they said they were subjected to intrusive body searches by female officers, intimidating interrogations, insults and yelling. In the following 24 hours, the authorities transferred 10 of the women to the quarantine section of Shahr-e Rey prison near Tehran and released the rest. Those transferred are Shokoufeh Yadollahi, Sepideh Moradi, Maryam Farisani, Nazila Nouri, Sima Entesari, Shima Entesari, Shahnaz Kiani, Maryam Barakouhi, Elham Ahmadi, and Avisha Jalaledin. After several days, an 11th woman, Sedigheh Safabakht, who was apparently held in Evin prison before, was also transferred to Shahr-e Rey prison. There are reports that some women are undergoing late-night interrogations involving verbal abuse and threats,” the statement reads in part.