Iranians, in Calls to VOA, Reject Government’s Claims About Protests

VOA – Iranian citizens are pushing back against accusations by Iranian officials that some people involved in the days-old nationwide protest movement have attacked government symbols at the behest of foreign agents.

Callers in Iran who spoke to Tuesday’s edition of VOA Persian’s Straight Talk program angrily denounced assertions by several Iranian officials that some protesters had resorted to violence since the daily anti-establishment demonstrations began last Thursday.

In a report published Tuesday, Iran’s state-run Press TV network quoted Deputy Interior Minister Hossein Zolfagharias as saying Iranian security forces had “decisively countered saboteurs” who engaged in violent acts. Videos posted on the internet in recent days have shown some people shattering windows of government buildings, and others protesting on streets where objects have been set on fire. 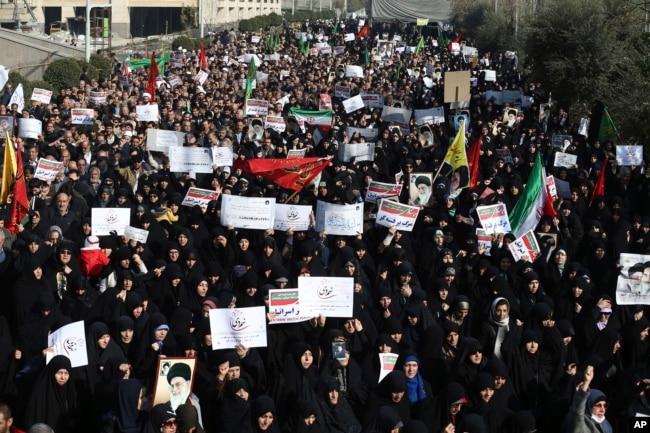 The callers to Straight Talk said they believed the violent scenes were the work of Iranian government supporters trying to tarnish the image of demonstrators who have marched peacefully in cities across Iran. But some protests have escalated into deadly confrontations with security forces, with authorities confirming that more than 20 people have been killed.

Some Iranian officials also have been linking the protests to alleged foreign interference. Habibollah Khojastehpour, deputy governor of western Iran’s Lorestan province, told state television on Sunday that “foreign agents” were involved in the deaths of two demonstrators in the provincial city of Dorud.

Several people in Iran who spoke to Straight Talk accused the government of making the claims about foreign interference to try to distract Iranians and turn them against Iran’s Arab neighbors, many of whom resent Iran’s growing assertiveness in the region.

Videos and messages from Iran sent to VOA Persian on Tuesday showed Iranian anti-government protesters rallying in multiple cities for a sixth straight day. Demonstrators in the capital, Tehran, chanted, “The police are supporting us,” while others in the southwestern city of Abadan chanted, “Death to the dictator” — a slogan directed at Iranian supreme leader Ayatollah Ali Khamenei and used in many of the other recent protests.

A caller from Tehran, who gave his name as Foad, said the protesters were upset with poverty, perceived injustice in society and government corruption. “But the most important objection of the people is toward the government’s foundation,” he said, referencing the rule of Iran by Islamist clerics who seized power in a 1979 revolution.

Another caller in Tehran, who identified herself as Zahra, said many Iranians are so impoverished that they have to look for food in garbage cans. She also criticized the government’s spending priorities. “Whatever resources we have in the country, the government is spending on Lebanon, Palestine and Iraq,” she said.

Tehran has provided money and weapons for years to Iranian-allied militant groups in Lebanon, Iraq and the Palestinian territories.

Michael Lipin
Michael covers international news for VOA on the web, radio and TV, specializing in the Middle East and East Asia Pacific. Follow him on Twitter @Michael_Lipin