VOA – The top U.S. military officer said on Tuesday Iran was complying with the pact curbing its nuclear program and warned that any American decision to walk away from it would make other nations less likely to enter into agreements with the United States. 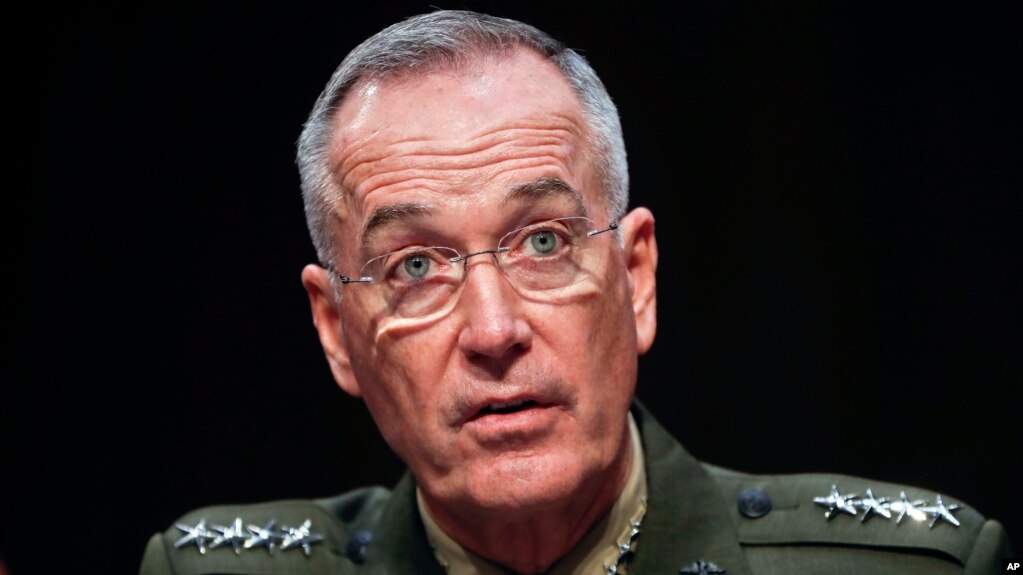 President Donald Trump is considering whether to withdraw from the 2015 nuclear deal between Iran and six world powers including the United States, calling the accord an “embarrassment.”

Marine Corps General Joseph Dunford, chairman of the Joint Chiefs of Staff, told the Senate Armed Services Committee that Iran was complying with its obligations under the nuclear deal, but had increased its activity in other areas.

The committee’s top Democrat, Senator Jack Reed, asked Dunford whether walking away from the Iran nuclear pact would affect the U.S. ability to negotiate with North Korea or devise a non-military solution toward Pyongyang.

“It makes sense to me that our holding up agreements that we have signed, unless there is a material breech, would have an impact on others’ willingness to sign agreements,” Dunford said during his reappointment hearing.

Trump this year also announced he would withdraw the United States from the international Paris climate agreement and the Trans-Pacific Partnership trade agreement.

U.S. officials, including senior military leaders, have said that the first option to deal with the threat posed by North Korea’s nuclear and ballistic missile program is through diplomacy.

The ambassadors to the United States from Britain, France, Germany and the European Union all strongly backed the nuclear agreement with Iran on Monday as long as Tehran continues to comply with the pact.

If Trump does not recertify by Oct. 16 that Iran is in compliance with the agreement, Congress would have 60 days to decide whether to reimpose sanctions on Tehran suspended under the accord. 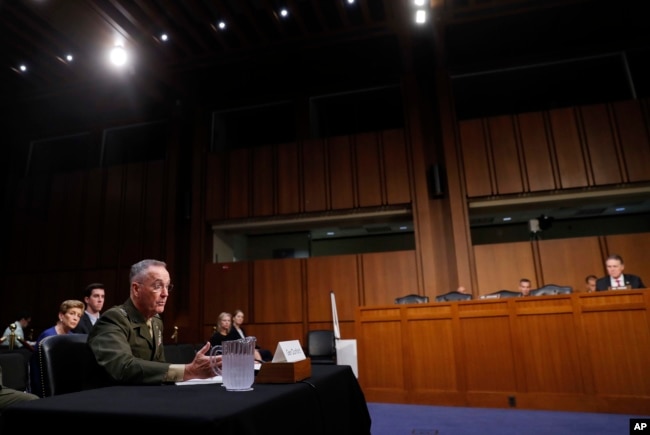 Congress could have last word

That would let Congress, controlled by Trump’s fellow Republicans, effectively decide whether to kill the deal.

Although congressional leaders have declined to say whether they would seek to reimpose sanctions, Republican lawmakers were united in their opposition to the deal reached by Democratic former President Barack Obama.

A collapse of the deal could trigger a regional arms race and worsen Middle East tensions.

Dunford said that while North Korea currently poses the most urgent threat, Russia presents the biggest threat in terms of overall military capability.

Asked if he supported U.S. lethal aid to Russia’s neighbor Ukraine, Dunford said he does and has “made that recommendation” within the administration. He said discussion of the issue has reached the White House, but did not say when a decision would be made.

Ukraine has sought U.S. support against Russia since a pro-Western government took power following street protests in 2014, when the Kremlin-backed president fled the country. Russia seized Crimea from Ukraine the same year.

Dunford also said the United States would not be able to “attain our objectives” in Afghanistan, where American forces have been deployed since 2001, without a change of behavior by neighboring Pakistan.

“It is unacceptable that Pakistan provides sanctuary, and we ought to bring the full weight of the U.S. government and our coalition partners on Pakistan to ensure that they do not provide the sanctuary that they have provided historically to groups like Haqqani and the Taliban,” Dunford said.

US remains frustrated by Pakistan

U.S. officials remain frustrated by what they term Pakistan’s unwillingness to act against Islamist militant groups including the Afghan Taliban and the Haqqani network.

The Trump administration is exploring whether to harden its approach toward Pakistan to crack down on militants launching strikes in Afghanistan.

Pakistan argues that it has done a great deal to help the United States in tracking down militants, and says it has suffered hundreds of deaths in Islamist attacks in response to its crackdowns.