House of Khomeini and Mass Executions of 88

Radiozamaneh – Figures at various levels of the Islamic Republic continue to react to the release of audio files involving conversations between the late dissident cleric Ayatollah Hossein Ali Montazeri and top government figures regarding the “death committee” in charge of the mass execution of political prisoners in Iran in 1988. 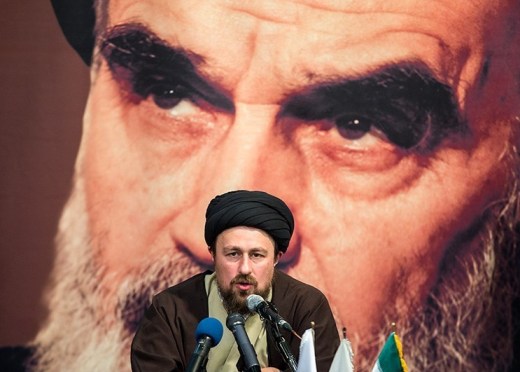 Hassan Khomeini a reformist political figure and one of the 15 grandchildren of Khomeini, sits in front of a poster of his grandfather.

Ayatollah Montazeri who in the 1980s was positioned to succeed the leader of the Islamic Republic, Ayatollah Ruhollah Khomeini, was sidelined and put under house arrest for his challenge to the mass execution of dissidents in the country’s prisons.

Hassan Khomeini, son of Ahmad Khomeini who is referred to in the audio files as one of the chief initiators of the executions has challenged the veracity of the statements attributed to his father and questions the objective of releasing what he refers to as “lies and unfounded statements” on the website of the late Ayatollah Montazeri.

Other figures loyal to the House of Khomeini evoke knowledge of Ahmad Khomeini’s “gentle and peaceful nature” as a challenge to his possible link to the “death committee” of the 1988 executions.

Meanwhile a day after the posting of the file on the website, Ahmad Montazeri, son of Ayatollah Montazeri was directed by the Ministry of Intelligence to remove the files from the late cleric’s website and his own Telegram page.

Soon after the releasing of the audio file in august 2016, the judiciary also got involved and summoned Ahmad Montazeri for a three hour interrogation session.

He later told Persian BBC that he has been told that since his father, Ayatollah Montazeri was a government figure at the time of the recordings, revealing these audio files is akin to revealing classified government information which is a crime. Ahmad Montazeri is due back for interrogation in the coming week.

Meanwhile top reformist figure Mohammad Tajzadeh has extended an apology for the executions of 1988 in his Facebook page and called on the government to adopt mechanisms to prevent such catastrophes from recurring.

In general however many of the figures loyal to Ayatollah Khomeini represented by views expressed in Jamaran website, continue to defend the mass execution of the political prisoners by referring to the armed operations of the Mujahedin-e Khalq (MKO) dissident group.

However many of the executed prisoners were not in any way connected to this group. In the audio file those involved refer to Mujahedin-e Khalq prisoners as serious threats to the system and speaks of possible threats of conspiracy transpiring from inside the jails by these prisoners.

But Jamaran website administrators know full well that the mass of political prisoners executed summarily in 88 were not all Mujahedin-e Khalq members and their omissions regarding the events has systematically impeded the process of truth finding in this matter.

Now a large spectrum of individuals, human rights activists and relatives of victims and even Green Movement journalists or activists are probing into the truth of this catastrophe and a file has been opened in the international court at the Hague to hear the evidence of witnesses in this regard.

So far the evidence suggests that the members of “death committee” responsible for perpetrating the executions stretched well into members of the House of Ayatollah Khomeini. It is not yet been established who issued the order to execute non-Mujahedin-e Khalq political prisoners.

It is possible to attribute the failure of the reformists in the Islamic Republic system to their chosen silence about the truth of the mass executions and lack of contribution to the process of truth seeking regarding this crime.

The mass executions of 88 may be regarded as the largest systematic massacre in Iran’s contemporary history and some have referred to it as the “Iranian Holocaust”. It is therefore necessary for the House of Khomeini to face the truth and avoid further deepening their culpability with silence and secrecy.