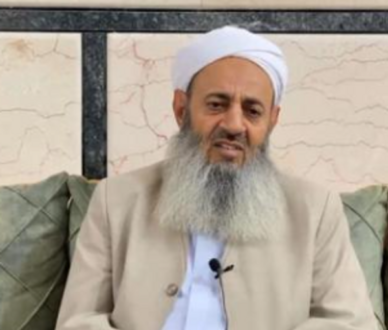 Iranwire – The Office for Sunnis has published a statement announcing that it has identified the individuals who “infiltrated” Friday Prayers in Zahedan.

The statement claims that during and following Friday Prayers on December 2, some infiltrators “resorted to destruction” in an attempt to interrupt the words of prominent Sunni clergyman Sheikh ol-Eslam Molavi Abdolhamid. The Maki Mosque’s security headquarters has since managed to identify some of these individuals, according to the statement.

One of the infiltrators, in a premeditated and malicious move, stole the flag of some separatist groups during the Friday Prayers and posted a photo of it. Following the incident, the Maki Mosque’s security headquarters took immediate action and collected the flag.

The statement claims that some of the “influential forces” who have been shouting dissident slogans and destroying public and private property have been identified and are under surveillance.

These individuals have been hired and organized by known centres and groups and are now spreading photos and other malicious propaganda. While emphasizing that the people of Sistan and Baluchistan province are sensitive to the territorial integrity of the country, the infiltrators have been warned that if they continue to “take advantage of the situation” they will be “dealt with”.