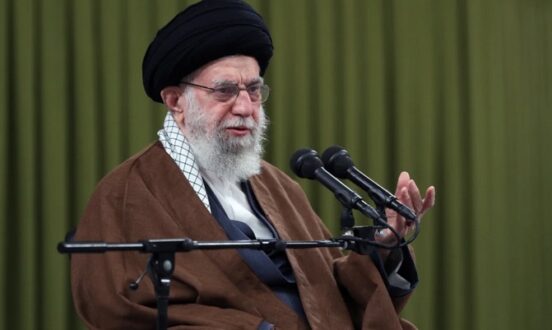 Iranwire – In a speech on November 22, Iran’s Supreme Leader Ayatollah Ali Khamenei praised the Basij paramilitary force for their key role in the bloody crackdown on antigovernment demonstrations, and urged them to keep their morale “high” as the more than two-month-old protest movement showed no sign of easing.

Addressing Basij militiamen and their commanders, Khamenei ended his one-hour speech by reciting the Quran, chapter Al-Imran, verse 139, which reads, ” So do not become weak, nor be sad, and you will be superior if you are [true] believers.”

A verse aimed at “encouraging” Muslims after a defeat

Islamic scholars say this verse is a call on Muslims to keep their spirits high and to fortify themselves after a defeat in order for them to become victorious.

According to 11th century Shia scholar Abu Jafar Mohammad bin Hassan Tusi, this verse was sent to the prophet of Islam to console the Muslims who had suffered heavy casualties in the 625 Battle of Uhud against the Meccans.

“To terrify the infidels, therefore, God commanded Muslims to chase the infidels. And while encouraging and inciting them, God forbade them from becoming lazy and feeling sorrow, and promised them [they would be rewarded] if they hold on to their faith in God,” Tusi wrote.

Prophet Muhammad and his followers were defeated in the battle because of their “disobedience to commands,” according to Muslim narrative.

A signal of weakness from the supreme leader

The 83-year-old Khamenei is a religious jurist in the Islamic Republic of Iran, and he considers himself as the heir of the imams (Islamic religious leaders) of Twelver Shia Islam. Twelver Shia followers believe their 12th imam disappeared in 947 and remains “hidden” until his return.

Khamenei is the commander-in-chief of the Islamic Republic’s armed forces. The elite Islamic Revolutionary Guard Corps (IRGC), Basij, army, and police are under his command.

During the 10 weeks of nationwide protests, Iranians have chanted slogans against Khamenei and his armed forces, and called for the downfall of the clerical regime.

Khamenei responded by calling the protesters “traitors,” “thugs” and “foreigners’ lackeys,” and by claiming that “they are too insignificant to hurt the regime.”

Meanwhile, his armed forces have unleashed a bloody crackdown that has killed hundreds of people, but this time Iranian citizens are resisting.

The protest movement shows no sign of abating, with demonstrators risking their lives in streets battles against the armed forces.

It remains unclear how this struggle will develop, but things cannot return to what they were before the protests erupted, even in the case that the government manages to temporarily dissuade citizens from taking to the streets.

Khamenei, armed forces commanders and those under their command know too well how Iranian citizens and the international community view them and their legitimacy, and to what extent their supporters have lost faith in the regime.

Khamenei advises his Basij forces to maintain their morale “high” and not to be “sad,” because he is going to need them for a long time to suppress the people.

By doing so, the supreme leader is sending out a clear signal of weakness.