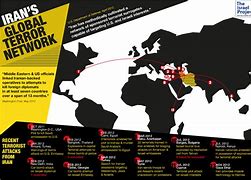 Iranian assassination plots are escalating. The West must respond

washingtonexaminer.com – The United States and its European allies (but the U.S. alone, if necessary) should warn that any successful Iranian assassination plot on their soil will result in military retaliation.

Such strengthened deterrence is necessary in response to Iran’s escalating assassination threats. The latest incident disclosed on Monday involves independent Iranian journalists living in Britain. Iran International reports that two of its British-Iranian employees have been told by British police that they face “an imminent, credible and significant risk to their lives and those of their families. Other members of our staff have also been informed directly by the Metropolitan Police of separate threats.”

Such stark “imminent, credible and significant” language is rare from British authorities. These technical terms strongly suggest an assessment by the Metropolitan Police’s Counter-Terrorism and Protection Commands (its division equivalents of the FBI and the Secret Service) that would-be Iranian assassins are either already present on British soil, traveling to Britain, or actively being recruited. That assessment will have been supported by reporting from the British intelligence community.

This is only the latest Iranian assassination plot against Western targets.

As the Washington Examiner first reported in March and the Justice Department outlined in August, the Islamic Revolutionary Guard Corps’s Quds Force recently plotted to assassinate former national security adviser John Bolton. As the Washington Examiner also reported in December 2020, Iranian threats were behind little-noticed congressional legislation to extend Mike Pompeo’s security detail beyond his tenure as secretary of state. Iran has also threatened Pompeo’s family members. Protective responses to these Iranian schemes have strained the budgets and personnel of the Secret Service and, in particular, the Diplomatic Security Service. A number of other recent Iranian plots against active and former U.S. officials remain classified.

It’s not just politicians who find themselves on Iran’s target list. In July, an AK-47-armed man was indicted after repeatedly lurking outside the New York home of Iranian dissident journalist Masih Alinejad. (Other Iranian officials were previously indicted on charges related to their attempt to kidnap Alinejad.)

Nor is Britain the only other Western power to see recent Iranian assassination threats. In April, an IRGC official was detained after attempting to recruit assassins to target an Israeli diplomat, a U.S. military officer, and a French journalist based in Europe. In 2019, the Netherlands’s exceptional AVID intelligence service declared Iran responsible for the 2015 and 2017 killings of two Iranians on its territory. Nor are Iran’s activities in Europe limited to the IRGC. Iran’s MOIS intelligence service plotted an explosives attack on a 2018 dissident conference in Paris, for example.

Nevertheless, the increased tempo and gall with which Iran is targeting its adversaries abroad make clear it is unfazed by possible repercussions of its mayhem. Tehran is clearly undeterred by the indictments and protective security measures that Western governments have thus far relied upon. Indeed, Iran likely sees political space and reason to escalate. Clearly unsettled by the extraordinary women’s rights protests that have rippled across Iran, Ayatollah Ali Khamenei’s geriatric theocracy is desperate to silence diaspora media coverage of its injustices. At the same time, it wants to scare the West into a more conciliatory posture on sanctions and economic issues.

The risks are clear. Testified by Tehran’s recent plots and encapsulated by its 2011 attempt to assassinate the then-Saudi ambassador and dozens of diners at Cafe Milano in Washington, Iran is willing to cause mayhem if it believes it can do so with relative impunity. And it’s clear Iran is increasingly emboldened to take the offensive initiative. The threat rhetoric extends to its proxies. The Lebanese Hezbollah’s Al Manar media arm referred to Assistant Secretary of State Barbara Leaf as a “doomsday crow” in a scathing piece on Tuesday, for example.

In turn, the U.S. and its European allies, particularly Britain and France, should urgently take two actions.

First, they should make clear to Iran’s key oil export partner, China, that they expect Beijing’s increased pressure on Tehran to end these plots. They should state that if no such pressure is forthcoming, Beijing’s interests with the West will suffer in reciprocity for any successful Iranian attack. Second, they should clarify that any successful Iranian assassination plot on their soil will result in joint military retaliation and that this retaliation may involve the targeting of officials responsible for any attack, such as Quds Force commanding officer Esmail Qaani.

The top-line calculus is clear: If Iran fears that killing a dissident will result in a few unenforceable indictments, it will judge that action as preferable. But if Iran fears that any assassination will see its IRGC or MOIS headquarters redesigned as rubble, it will act more cautiously.