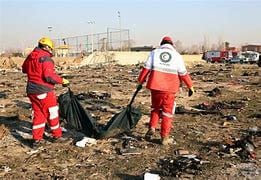 Al- Monitor – The diplomatic row between Iran and Canada over a passenger plane shot down by Iranian forces continued this week.

The Canadian government released its report on Ukrainian International Airlines Flight 752 on Thursday.

The passenger plane took off from Tehran for Kyev on Jan. 8, 2020, but was shot down shortly after takeoff. All 176 people on board perished, including 55 Canadian citizens and 30 permanent residents of Canada. At the time, Iran was striking US military positions in neighboring Iraq in response to the assassination of Iranian commander Qasem Soleimani.

Canadian Prime Minister Justin Trudeau and two members of his cabinet issued a statement on the report on Thursday, saying that Iranian authorities were fully responsible for the tragedy.

“Iranian civilian and military authorities, through their decisions, actions, and omissions, are fully responsible for the downing of Flight PS752,” they said, adding that Iranian officials exhibited “recklessness, incompetence, and wanton disregard for human life.”

The report, filed by a Canadian forensics team, accused Iran of placing anti-aircraft systems near Tehran’s civilian airport and failing to issue accompanying protections, such as closing Tehran’s airspace and notifying airlines.

“The families and loved ones of the victims deserve a full explanation of Iran’s dangerous and deliberate choice to keep its airspace open, and a full accounting of the Iranian military’s training and command and control procedures for anti-aircraft operations,” said Trudeau in the statement.

The Iranian government largely dismissed the report on Friday. Deputy Foreign Minister Mohsen Baharvand said that Canada lacks the authority to conduct a unilateral report on the incident. He accused Ottawa of politicizing the event and harming civil aviation norms, according to the official Tasnim News Agency.

Tehran concluded in March that the shooting down of the plane was the result of human error. An air defense operator mistook the jet for a hostile target and fired two missiles at it. Like Canada, Ukraine rejected this conclusion.

The Islamic Republic continued to try to take responsibility for the downed plane. In April, an Iranian prosecutor charged 10 people in relation to the incident.

Tensions between Iran and Canada on the issue are not new. Last month, a Canadian court ruled that the shooting down of the plane was an act of terrorism by the Iranian state. The Iranian Foreign Ministry likewise said Canada lacked jurisdiction and accused it of playing politics in response.

Like its ally and sole neighbor the United States, Canada lacks diplomatic relations with Iran.