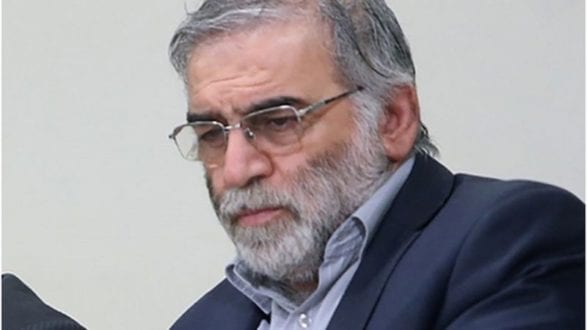 iranwire.com – Only a few hours after the assassination of Mohsen Fakhrizadeh, a senior member of the Revolutionary Guards who was reputed to be the “father” of Iran’s secret nuclear program, his death became a pretext for settling political scores among opposing factions of the Islamic Republic.

In his short message after the assassination, Iran’s Supreme Leader, Ayatollah Ali Khamenei, chose to emphasize only two points, calling on Iranians “Firstly, to investigate this crime and to prosecute its perpetrators and its commanders,” and “second, to continue the martyr’s [Fakhrizadeh’s] scientific and technological efforts in every sectors where he was active.”

President Hassan Rouhani, whose silence in the hours after the assassination was widely criticized by his adversaries, eventually broke his silence on the morning of Saturday, November 28. “This brutal assassination shows that our enemies are passing these weeks in a state of anxiety, weeks when they feel the pressure easing and the world situation changing,” said Rouhani at the weekly meeting of the National Coronavirus Taskforce.

Iran is “wise enough” not to fall into a trap laid by the Zionists, tweeted Rouhani. “They want to create havoc [but] they should know that we know what their plans are.”

During the afternoon of Friday, November 27, the Iranian media reported that unknown assailants had assassinated Fakhrizadeh on a road in Absard, near Tehran, but accounts of the attack as told media and officials contradicted each other.

According to Fars News Agency, associated with the Revolutionary Guards, first there was an explosion on the road where Fakhrizadeh’s car was traveling, and then hidden gunmen started firing on the car from unidentified locations. Defense Minister General Amir Hatami, however, said that the explosion occurred after the car was stopped by gunfire.

There were also discrepancies concerning other details of the attack and not all of them can be explained by security considerations. How many people were killed and injured in the attack? The only point that various accounts appear to agree on is that Fakhrizadeh was killed and his two bodyguards were severely injured.

The accounts also differ about the number of assailants and what happened to them after the attack. The local reporter for state-run radio and TV first reported that, “based on hearsay,” one of the assailants had been arrested. But media associated with the government later denied this report.

In the first reports on Fakhrizadeh’s assassination, Iranian media referred to him as a “nuclear scientist,” but after Behrooz Kamalvandi, spokesman for Iran’s Nuclear Energy Organization, announced that all nuclear scientists were safe, the media started to refer to him with other titles.

Hamid Rasaei, a former member of parliament and a member of the principlist (conservative hardliner) Front of Islamic Revolution Stability, was perhaps the first to remark on the “strange tone of government officials” in regards to Fakhrizadeh.

Others then joined the fray, including Fereydoon Abbasi, former head of Iran’s Nuclear Energy Organization and a current member of parliament. “Nobody should deny that he was a nuclear scientist,” he told Iranian TV. His assassination is meant to “prepare the ground for future negotiations [on a future version of the nuclear deal with Western powers] and to bring Iran to its knees. We have to be careful.”

Government officials have been referring to Mohsen Fakhrizadeh as the head of the Defense Ministry’s Research and Innovation Organization. President Rouhani, in his statement, made no mention of Fakhrizadeh’s connection to the nuclear program. But now that Khamenei himself has referred to Fakhrizadeh as “one of our country’s eminent scientists in the nuclear and defense fields” perhaps the war of words on this point will subside.

For many years now the name of Mohsen Fakhrizadeh has been in the news as a key figure in Iran’s nuclear and military efforts. Eight years ago, in August 2012, the Wall Street Journal wrote that the “Iranian scientist considered Tehran’s atomic-weapons guru, until he was apparently sidelined several years ago, is back at work … sparking fresh concerns about the status of Iran’s nuclear program.”

The critical statements by Hamid Rasaei and Fereydoon Abbasi, of the government’s unwillingness to refer to Fakhrizadeh as a nuclear scientist, were just the opening shots in a series of political attacks against Rouhani by opposing figures and the media. Even before this latest incident, Rouhani and the 2015 nuclear treaty, which the opponents have called the “poisoned chalice,” as well as the possibility of fresh negotiations with the US, have been the targets of attacks.

In contrast, Rouhani has ignored his adversaries in his public statements and has only talked about the “enemies” who “are not going to succeed in achieving their evil goals.”

In recent weeks, before the assassination of Fakhrizadeh, attacks against Rouhani had reached an unprecedented level. Even a number of pro-Khamenei students at Qom seminaries had planned an “impeachment march” for November 25, but apparently Khamenei vetoed the plan.

Mojtaba Zonnour, chairman of the parliamentary National Security and Foreign Policy Committee, attacked “negotiation traffickers.” And Abbas Moghtadaei, deputy chairman of the same committee, tweeted that “when a politician in our country was saying ‘commitment for commitment’ and ‘action for action,’” in other words, when Iranian officials were apparently insisting on their good faith intentions with outside powers, “the enemies were planning to assassinate our scientists and their ghastly scheme was carried out.”

A few days ago, on November 25, Rouhani had said that “Iran and the United States can both decide and announce that they will return to the terms of January 20, 2017 [before Donald Trump’s presidency started, which was soon followed by the US withdrawal from the nuclear deal] and this can be a great solution to many issues and problems … and then we can continue taking the next steps on different issues. … The policy of the Islamic Republic of Iran, as it has repeatedly emphasized, is commitment for commitment, action for action, reduction of tension for reduction of tension, respect for respect and international commitments for international commitments. If there is will for this in the coming American administration, I think it is very easy to settle problems”.

Nezamoddin Mousavi, another principlist member of parliament, tweeted that “our statesmen send signals that they want new negotiations but then our nuclear scientist is assassinated. Fear and retreat are not wisdom but stupidity.”

Mohammad Qomi, head of the Islamic Development Organization, who has been mentioned as a possible presidential candidate in next year’s election, said that those who have their heads in the sand must raise their heads. He attacked negotiations as a “give but no take” proposition.

Alireza Panahian, a clergyman close to the security agencies, wrote that “those who are preparing the ground [for the return of the Hidden Imam or the Shia messiah] are martyred on Fridays and those who plan for assassinations claim that they want negotiations.”

There have been numerous comments like the above. Telegram channels associated with the Revolutionary Guards have been posting and reposting a speech by a Hojatoleslam Mehdi Taeb, brother of Hossein Taeb, who is the head of the Guards’ Intelligence Organization. Mehdi Taeb is a clergyman who often makes such speeches that are carried by the Guards’ Telegram channels.

In this speech, Taeb compared Rouhani with Osman, the third caliph (Sunni Muslim leader) after the Prophet Mohammad, who is detested by Shia Muslims and who was killed in 656 AD by protesters who wanted a new caliph. Taeb said that instead of impeaching Rouhani and removing him from office “which is a ghastly scheme by the Americans and traitors, or by the domestic simpletons” he should stay but “all institutions such as the Revolutionary Guards must enter the arena and use all their power to control the situation until the next election.”