US to Grant Waivers to Some Countries Importing Iran Oil

VOA — The United States says it plans to issue temporary waivers to several countries, allowing them to continue purchasing Iranian oil without being subject to forthcoming U.S. sanctions.

Sanctions on Iran are expected to be reinstated Monday, the result of U.S. President Donald Trump’s withdrawal earlier this year from the nuclear agreement between Iran and six world powers. Any country importing Iranian oil that does not receive a waiver will be subject to U.S. financial penalties.

U.S. Secretary of State Mike Pompeo announced the waiver decision in a conference call Friday, but did not specify which countries will be exempted or how long they would last. He said only that the European Union will not be granted an exemption.

“We expect to issue some temporary allotments to eight jurisdictions, but only because they have demonstrated significant reductions in their crude oil and cooperation on many other fronts and have made important moves toward getting to zero crude oil importation,” Pompeo said.

Earlier, Bloomberg reported that South Korea, India and Japan are among the exempted countries.

All three countries are among Iran’s biggest oil customers, and have argued that if they stop their purchases immediately, it would cause a worldwide spike in oil prices.

Turkey’s Energy Ministry announced Friday that Turkey is among the countries that will be given an exemption, but said the government does not yet know all the details.

Two of the eight countries receiving a U.S. waiver will completely cut off imports of Iranian oil in a matter of weeks, while the other six will “greatly” reduce their imports, Pompeo said.

The sanctions are part of what the Trump administration calls a “maximum pressure” campaign aimed at convincing Iran to abandon its nuclear program and end its support for U.S. foes in the Middle East. Pompeo says the campaign is working

“The maximum pressure we have imposed has caused the rial (currency) to drop dramatically, (President Hassan) Rouhani’s cabinet is in disarray, and the Iranian people are raising their voice even louder against a corrupt and hypocritical regime,” Pompeo said.

After Pompeo’s announcement, President Trump tweeted what looks like a movie poster image of himself with the words “Sanctions are Coming, November 5.” The typeface and phrasing were inspired by the TV series “Game of Thrones.” 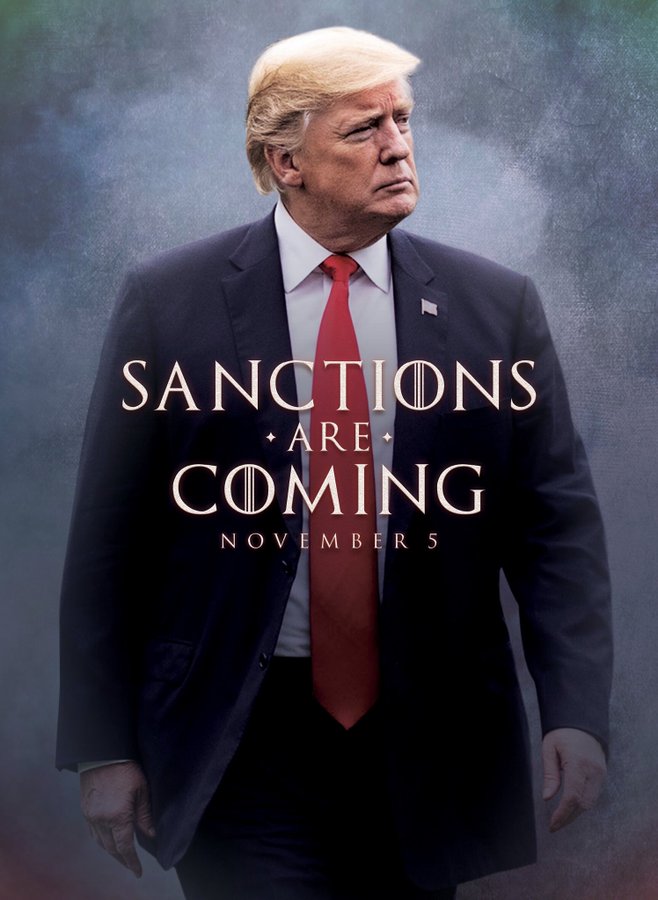 HBO, which creates the TV series, said in a statement, “We were not aware of this messaging and would prefer our trademark not be misappropriated for political purposes.”

The U.S. on Monday will also expand sanctions on a wide range of Iranian entities, Treasury Secretary Steve Mnuchin said.

“This includes hundreds of targets previously granted sanctions relief under the JCPOA (the Iran nuclear deal formally known as the Joint Comprehensive Plan of Action), as well as more than 300 new designations,” Mnuchin said.

Notably, the Trump administration is not completely cutting off Iran from the Society for Worldwide Interbank Financial Telecommunication (SWIFT) international banking system — an option that had been considered.

Mnuchin says the U.S. has informed SWIFT that it would be subject to U.S. sanctions if it provides financial messaging services to “certain designated Iranian financial institutions.”

But “humanitarian transactions to nondesignated entities” will continue to be allowed,” he said.

Speaking to VOA Persian at the State Department, U.S. Special Representative for Iran Brian Hook said Washington is urging banks around the world to enable the sale of food, medicine and medical devices to help the Iranian people.

“The biggest challenge we have is the Iranian regime has a banking sector that doesn’t comply with banking standards,” Hook said. “And that makes it very hard for foreign banks to facilitate humanitarian sales [to Iran].”

Guita Aryan of VOA Persian contributed to this report from the State Department.