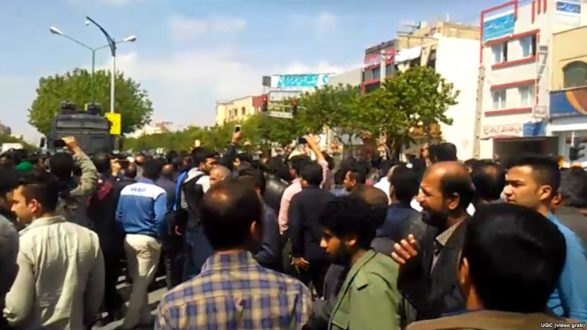 Radiofarda – As the first round of reimposed U.S. sanctions against Iran takes effect, the Iranian economy is taking a beating, and Iran’s leaders are expressing concern about maintaining social cohesion in the face of increasing economic pressures.

Iran’s Minister of Cooperatives, Labor, and Social Welfare, Ali Rabiei, has predicted the country will lose one million jobs by the end of the current Persian year on March 20, 2019.

“We should be honest with the people and tell them that we are engaged in a real war and we need more public confidence in the government and its rational behavior,” Rabiei said in an interview with pro-reform daily E’temad August 4, adding, “The government, for its part, needs more diligence.”

Rabiei, also known as “Ibad” for his secret service days’ nickname, referred to the recent unprecedented fluctuations in Iran’s currency market and admitted that the dialogue between the government and the people has been weakened amid the financial turmoil.

The value of Iran’s national currency, the rial, started to plummet at the beginning of the Iranian New Year March 21, and dropped further when the U.S. announced it would withdraw from the Nuclear Deal and reimpose sanctions on Iran.

The dramatic slide in the value of the rial against hard currencies like the euro and the dollar has led to widespread protests across the country, including among the merchant class, which was traditionally a supporter of the clerical rulers. The shopkeepers and traders believe soaring gold prices and the downfall of the rial’s value are direct results of government mismanagement by the ruling conservative clerics.

Before the Islamic Revolution, one dollar was exchanged for almost seventy rials, but currently one must pay more than 120,000 rials for a dollar. Businessmen and shopkeepers are very unhappy and argue, “The establishment has done nothing to address the problem, so far.”

Nevertheless, Rabiei insists that in the current situation, Iran needs to “implement the theory of social resistance to prevent social fragility and increase the level of social economic tolerance.”

Rabiei said one way to do this is by controlling the price of food and medicine for people in need. He further urged the government to immediately address the country’s economic problems.

The first batch of new U.S. sanctions is expected to be implemented August 6, with the second round taking effect November 4.

In the meantime, research commissioned by Iran’s parliament shows that each 10 percent increase in the value of hard currencies, boosts inflation by up to 2 percent in Iran. Research from Iran’s Central Bank suggest fluctuations in the country’s currency markets have raised inflation up to 25 percent.

Meanwhile, in an interview with an economic publication, “Tejarat-i Farda” (Tomorrow’s Business), an economist affiliated with John Hopkins, Steve H. Hanke, says that current inflation in Iran amounts to 117 percent, which is 10-12 times more than estimates from the Islamic Republic’s officials.

While President Hassan Rouhani’s administration is bombarded with criticism for its economic performance, Iranian legislators are set to question Rabiei over the 12.5 percent unemployment rate. He already appeared before parliament in March, when they narrowly voted to keep him in office.

Immediately following spontaneous protests that broke out late last December, the Islamic Republic’s Supreme Leader Ayatollah Ali Khamenei ordered President Rouhani, the speaker of parliament and the head of the judiciary (Najaf born Larijani brothers) to work together and find a way to address the country’s economic problems.

On July 31, 200 of 290 members of parliament signed a letter to Rouhani urging him to reshuffle his cabinet and change his economic team.