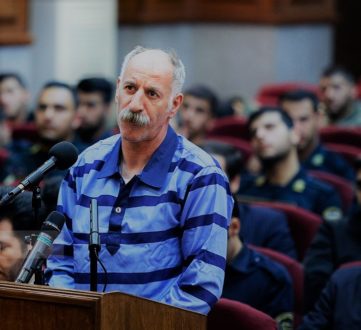 The criminal trial of Mr. Yavar Mohammad Salas, presided by Judge Mohammadi Kashkooli, has reached a verdict that is extremely worrying and in need of immediate attention. After three consecutive court hearings, on 19th March 2018, Mr. Salas was given the death sentence, despite the fact that the murder case against him remains incomplete and unsubstantiated, with no credible evidence that proves Mr. Salas as guilty. This death sentence is being forced upon him, and his case is being rushed in every way possible by the prosecution and the Regime, in order to expedite the conviction and execute Mr. Salas. As outlined below, even though there is compelling evidence proving Mr. Salas’ innocence, the Court has blindly given him the death penalty as part of the Regime’s plan to target and execute him, as means to a greater plot of going after the spiritual leader of the Gonabadi Dervishes, Dr. Noor Ali Tabandeh, at age 91. This is an extremely critical matter which needs immediate intervention in order to stop the execution of Mr. Salas who is innocent and is being prosecuted in a case which has quickly become an evil witch-hunt. 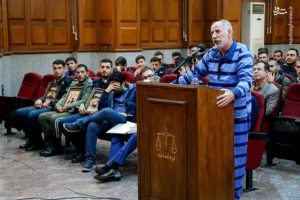 Mr. Salas, who was charged with the murder of three police officers, previously attended a court hearing on Sunday 11th March 2018, where he was not allowed to hire a Defence Attorney of his own choice to defend himself. Mr. Salas was also tortured and interrogated prior to the court hearing inside solitary confinement. False statements made by the prosecutor inside the court, to imply that Mr. Salas confessed to the murder charge of the three police officers, was absolutely negated by Mr. Salas himself during his previous court trial, where he rejected all allegations and pleaded ‘Not Guilty’. This entire case against Mr. Salas is a false and cruel accusation set up in an orchestrated attempt to forcefully sentence him to death and execute him. The court trial of Mr. Salas was initially being broadcasted live on Iran’s National Television that is controlled by the regime, in order to malign his image as a “criminal”, and was quickly shut down soon after Mr. Salas pleaded ‘Not Guilty’ and rejected all allegations made against him.

The case lacks any evidence of a murder weapon, and does not have any credible evidence to prove that the driver of the bus was Mr. Salas, or even place him at the scene of the crime. The prosecution does not have any confession from Mr. Salas, despite their repeated attempts to torture him in solitary confinement. The heavily tampered video clip which the Regime has tried to push as supposed evidence for the case, is clearly fabricated and tampered with, and therefore inadmissible as evidence.

There is substantial evidence proving the innocence of Mr. Salas, and the arguments outlined in the news article in the following link, strongly support his case.

The Trial of Mr. Salas and an Evil Plot Against the Gonabadi Dervishes and their Spiritual Head, Dr. Noor Ali Tabandeh

The new evidence that has surfaced, makes it even more certain that Mr. Salas is innocent, and the murder charges imposed on him are entirely baseless and false.

According to his statement, he said the following: “Actually, we [Basijis] were charging towards them [Dervishes], and they retreated. Then we [Basijis] took two steps back. I looked behind me, and saw that a bus has hit me. I came to stand up, and I realized that I cannot. Next thing I see is that I am in the hospital.”

The witness statement proves the following:

This case highlights the deep-rooted corruption and failure of Iran’s Judiciary system, which is controlled single-handedly by the Iranian regime. This has resulted in an innocent man being sentenced to death. The arguments presented above, are clear reasons of why the conviction of Mr. Salas is not valid and lacks legal credibility. By virtue of this, the current death penalty should be cancelled and held void, and this entire trial should be conducted from the beginning in a fair and just manner. 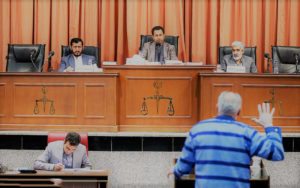